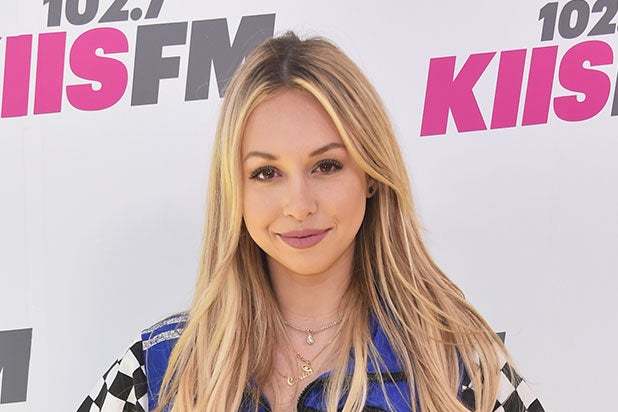 Sacha Baron Cohen has mocked politicians like former Vice President Dick Cheney, U.S. Sen. Bernie Sanders and vice presidential candidate Sarah Palin for his Showtime series “This Is America” — but his mockery of former “Bachelor” contestant Corinne Olympios has brought complaints that he is pointlessly punching down.

Olympios competed on Nick Viall’s season of “The Bachelor,” making it as far as the hometown dates episode. She then appeared on one season of “Bachelor in Paradise,” which suspended production after “allegations of misconduct” — specifically, Olympios’ accusations that she was a victim in a sexual encounter that raised questions about consent.

In Olympios’ “Who Is America” segment, Baron Cohen played an Italian photographer. He duped the “Bachelor” star by telling her she had won an award for reality star of the year. He then persuaded her to pose before a green screen to pretend she helped Ebola victims in Sierra Leone, and to lie that she had stopped a warlord from killing thousands of people.

“Don’t get me wrong, the Corinne Olympios segment’s funny, but trying to dupe her feels like low-hanging fruit compared to some of this show’s other guests,” one Twitter user said.

“Dick Cheney, Sarah Palin, Bernie Sanders… Corinne Olympios?” Inside Edition asked Olympios on Monday. “How do you fit in?”

“I don’t get it either,” Olympios replied. “But I guess no one is off-limits.”

Olympios previously told The Daily Beast that the whole experience was confusing, and that during the shoot for the segment, the producers took her phone and asked her manager to leave.

Also Read: Sacha Baron Cohen's 'Who Is America?' Characters Have Been Skulking Around Online for Months

“I go there, I’m in hair and makeup, my manager’s with me, he’s signing papers for me, they’re picking out my outfits, everything’s really awesome, and then all of a sudden he starts asking me very, very strange questions. And I’m so confused. I’m like, wait, what’s going on?” she said. “They took my phone away and they wouldn’t let my manager come with me into the warehouse where they were shooting. So no manager, no phone.”

Olympios said she played along because she wanted to leave, despite getting “visibly upset.”

“I was like, I’m leaving, and they were like no you’re not, you cannot step outside the building right now,” she told The Daily Beast. “I’m like, are you guys kidnapping me? I don’t get it. It was like, you’re holding me here against my will, what the f— is going on? You guys are f—ing out of your minds!”

In an interview with Vanity Fair, she said she thought to herself, “‘Oh my God, am I going to die? Is this O.K.? Am I O.K.?’ I’m grabbing people, but no one’s talking to me. I’m like, ‘Where is my manager?’ I’m panicking. I’m hyperventilating.”

As Vulture’s Kathryn VanArendonk wrote, “What is this segment trying to satirize, exactly?”

“At its most damning, the segment is a swipe at how happy Olympios is to be on television, and what exactly she’s willing to do for publicity,” VanArendonk wrote in her piece, headlined, “What’s the Point of Pranking Corinne from ‘The Bachelor’?”

“But for Baron Cohen, a notorious big-budget prankster who delights in making himself look like an idiot to take down other people as collateral damage, that satire can cut both ways,” VanArendock wrote.

Don't get me wrong, the Corinne Olympios segment's funny, but trying to dupe her feels like low-hanging fruit compared to some of this show's other guests#WhoIsAmerica

#WhoIsAmerica Corinne Olympios bit has been getting some stick as some have found it cruel to go after a reality tv show star. I thought the point that Sacha was trying to make was that we shouldn't be idolising these people as they will say or do anything to extend their 15 mins

The political stuff is funny but this Corinne segment is pretty gross. #WhoIsAmerica

I don't know who Corinne Olympius is & have never seen The Bachelor, but she showed her fame-hungry side by claiming 2 have saved 6000 villagers from massacre & spending time helping Ebola victims. Then asking for money to arm child soldiers. Real dumb blonde #WhoIsAmerica

Episode 2 was even better than 1! #Corinne from the bachelor got GOT! Dick Cheney was fooled completely. Oh, and Kingman, AZ got exposed for their utterly ignorant racism. #WhoIsAmerica #DickPic