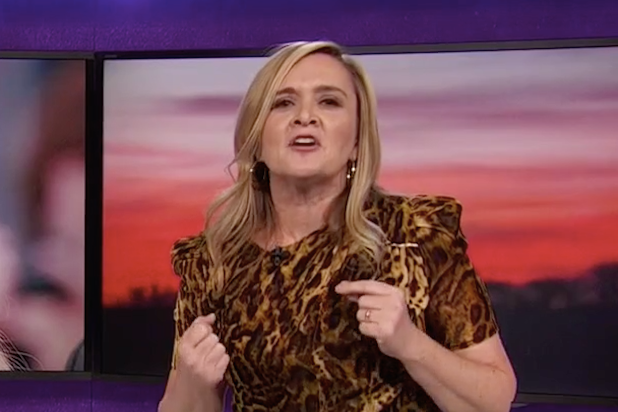 “Let me just say, one mother to another, do something about your dad’s immigration practices you feckless c–t!” Bee said in response to Ivanka not challenging her father’s immigration policies.

“He listens to you. Put on something tight and low cut and tell your father to f–king stop it. Tell him it was an Obama thing and see how it goes,” she added.

The segment was critical of a tweet where Ivanka was photographed holding her 2-year-old son, with Bee calling it “oblivious” given the forced separation of parents and children that the Trump administration was enforcing against undocumented immigrants at the U.S. border.

Coming just days after “Roseanne” was pulled by ABC over a racially-charged tweet, many — particularly those on the right — expressed outrage over what they considered a double standard. The oft-repeated charge on Fox News and elsewhere asserts that left-leaning and liberal media figures like Bee (or Bill Maher ) are held to a lower standard than conservative counterparts.

Both TBS and the White House did not immediately respond to request for comment from TheWrap.

This is disgusting. How is this acceptable? And how are we expected to take any of these publications seriously if they gleefully repost something like this at the same time they (rightfully) condemn @therealroseanne? You know the saying Love is Love? Well Hate is Hate. https://t.co/YTjmZQ4zMV

How is this even remotely funny? Isn’t comedy supposed to make you laugh? https://t.co/oXtG91Ye0P

Bullying and name calling is never right. And “well, they do it” doesn’t justify it. https://t.co/kxx2zVtweC

Question: “Dave, what do you mean the Left killed comedy?”

This absurd double standard is exactly why so many of us are pissed about @therealroseanne losing her show. Let’s settle on one set of rules applicable to everyone. https://t.co/sKfgRH2dA0

If a conservative said this about Malia Obama, they'd be dragged into the street and stoned to death https://t.co/e4b2ta8Ua8

The double standard is awe inspiring.

I don’t even disagree with her. I’m just saying… the double standard is remarkable. https://t.co/bezy3N5ow6

Heya @brianstelter – Here’s that double standard you were talking about. Looking forward to this in your media round up. https://t.co/GQC3O98bAa

This is an utter disgrace, from an untalented, nasty and desperate clown.

Maybe for her next act, she will make fun of a cancer patient’s “nazi” haircut. Oh wait. https://t.co/NUUDSqedBF

There's one obvious reason no one except conservative media raised an eyebrow over @iamsambee's remark about @IvankaTrump: She's a woman. If Kimmel had said it, there would be a blowback.

What's being said is so much less important than who says it. Sam Bee is protected.