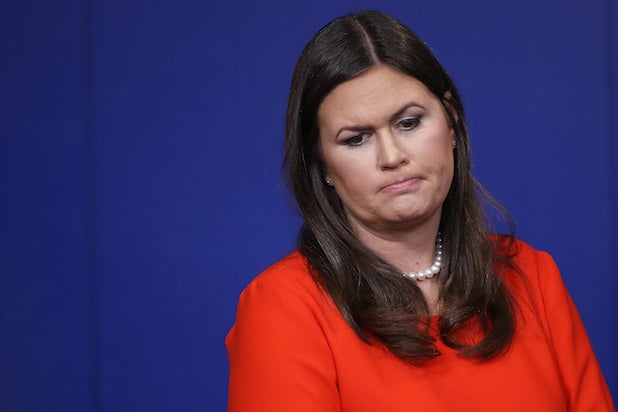 White House Press Secretary Sarah Sanders is coming under fire online for backtracking on her prior statements.

But just a week ago, Sanders denied a Washington Post report that Trump planned to remove McMaster from the role.

Also Read: Trump Says He Would Tell 25-Year-Old Self: 'Don't Run for President'

Just spoke to @POTUS and Gen. H.R. McMaster – contrary to reports they have a good working relationship and there are no changes at the NSC.

“One thing is clear, Sarah Sanders has absolutely no problem with lying,” one user tweeted.

“The only fake news comes from the White House,” another added.

In the Post’s initial report, they explained that a White House spokesperson did not dispute that the president had already made a decision about McMaster, despite Sanders’ denial.

“White House Chief of Staff John F. Kelly — who has personally been eager to see McMaster go — has also told White House staff in recent days that Trump had made up his mind about ousting McMaster,” the Post reported.

Earlier Thursday morning, it was Trump himself who was called out on Twitter. Trump’s lead lawyer in the Russia case, John Dowd, resigned on Thursday. But Trump tweeted just 11 days earlier that he was “VERY happy” with the work of his legal team.

See some of the Twitter reactions to McMaster’s replacement below:

One week ago, Sarah Sanders denied that Trump had made the decision to replace McMaster when we reported this. Now, McMaster is out, and Bolton is in. https://t.co/RJBjdl9Zxw https://t.co/GKBQEcB2aZ

Even after Sanders publicly pushed back on WaPo report on McMaster exit, our sources told us we were correct. Trump had indeed made his decision. He just wasn’t ready to announce it yet — and was mad it had gotten out. https://t.co/NejHjQHuLv

So Trump waited a few days to fire #McMaster just to dodge the reporting that it was happening? Sanders went out last week and made another hollow statement about no change. Is that unfair criticism of her? When you deceive on small things, hard to trust on anything.

One thing is clear, Sarah Sanders has absolutely no problem with lying.

That liar Sarah Sanders Huckabee and John Kelly swore over the weekend that HR McMaster would not be fired. Another lie from this corrupt White supremacist House. pic.twitter.com/avdJZp573M

Hey guys remember that time one week ago when Sarah Sanders wrote ????Just spoke to @POTUS and Gen. H.R. McMaster – contrary to reports they have a good working relationship and there are no changes at the NSC…… ????????????

not even a WEEK ago, sarah huckabee sanders told us mcmaster wasn't going anywhere.

I wonder what other Orwellian dissembling Sanders will come up with when a retired McMaster, now freed from any need to save his Army career, starts talking. https://t.co/5x8ZrHEXK9

But Sarah Sanders said you and McMaster were going strong. Did she….could she have possibly lied?

Re: McMaster: help us all. Trump is a lunatic that just appointed a lunatic in Bolton. Sarah Sanders and Trump are GD liars. Not a day of peace with this Admin. Hold on folks, bumpy ride coming.

Didn't Sarah Sanders say Trump was not going to fire McMaster around 3 whole days ago? The only fake news comes from the WH.

We knew she was a liar. We know she will always be a liar.

6 days later. And now they're going to start blaming him, behind the scenes, for leaking DO NOT CONGRATULATE. You just know it.
Sanders: 'McMaster is a dedicated public servant' https://t.co/8F85ztdb8U

Welp, another one bites the dust. @PressSec Sarah Huckabee Sanders got caught lyin’ to the press again. H.R. McMaster will be replaced by a belligerent war hawk that will feed Trump’s base. I suspect that Mueller will be fired shortly. It’s going to get ugly fast. https://t.co/CjIsV4SFZA