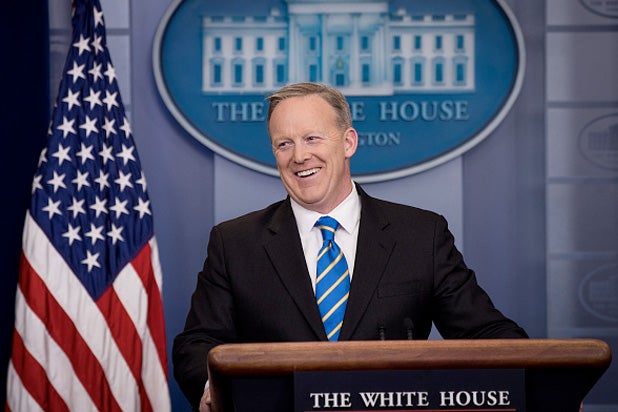 White House Press Secretary Sean Spicer joked that he expected to have an “egg-cellent” time during the annual Easter Egg Roll during Tuesday’s press briefing.

“I think we’re going to have an egg-cellent time,” Spicer said as the briefing room erupted with laughter. “Come on! You can’t ask the question and not get the answer,” he responded.

Spicer played the role of the Easter Bunny at the White House’s annual Egg Roll event back in 2008 when George W. Bush was president.

“We have worked really well, I think we will have a very enjoyable day on Monday. Tickets have been sent out to schools in the area… There will be a large military contingent participating we well,” Spicer said. ” I think there is five waves over two-hour periods in which children and their families can come to the White House.”

President Rutherford B. Hayes started the Egg Roll tradition back in 1878, with the bunny first making an appearance in 1969 during President Richard Nixon’s administration, according to the New York Daily News. A member of the administration often plays the bunny and Spicer was an assistant U.S. trade representative for media and public affairs when he landed the gig.

Spicer has probably advanced in his career to the point that he wouldn’t be expected to wear the bunny suit this time around.