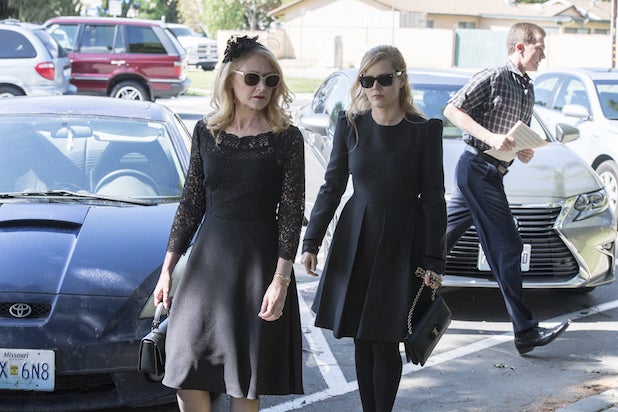 (Spoiler alert: Please do not read ahead unless you’ve seen Episode 102 of “Sharp Objects,” “Dirt.”)

It’s a well-known fact that writers have a love-hate relationship with words. But on “Sharp Objects,” journalist Camille Preaker (Amy Adams) takes that dynamic to a whole new level, as she has a history of carving them into her skin.

While the new HBO limited series — based on “Gone Girl” author Gillian Flynn’s debut novel — is taking great care with how it’s approaching the cutting storyline, it is still prominently featured, as it is a pivotal part of Adams’ character. And without those words on Camille’s body, showrunner Marti Noxon wouldn’t have had the perfect title for each episode ready to go.

“I went through the book and just took out every single word Gillian mentions. And then would look at what I was trying to do in the episode, and I don’t think we invented any, we might have, but I don’t think we did,” Noxon told TheWrap in a recent interview.

“Vanish” is the first word we see on Camille’s body — and the title of the pilot — when it is exposed as the lead character disrobes to get into a bathtub at the end of the July 8 premiere.

“So for ‘Vanish,’ you know for me, I felt like for her to go home was…like disappearing back into her past,” she said. “I had written it into the script [that] the present and the past get so entwined in the visual that [director Jean-Marc Vallee] obviously took that and made it even more incredible. So I felt like vanishing into your past was kind of a theme of the first episode and is she going to survive it?”

Noxon then explained why she selected “Dirt” for the title of the second episode, which aired Sunday: “For me, that represented the funeral of Natalie Keene and also the gossip in the town and the way people sling dirt and how you kind of can metaphorically kill someone with your words. And certainly Adora (Patricia Clarkson) is the type of person to use words to almost kill; they’re so painful sometimes. So I was like, that’s a great word!”

The “Buffy the Vampire Slayer” alum explained the importance of words when it comes to holding onto memories — both good and bad — through a personal story about a friend whose father had advanced Alzheimer’s and “started to have his favorite things and places and memories tattooed on his body.”

“And that was so moving, because it was his children, his history; it was the opposite of Camille,” Noxon said. “It was all these good things. But when I got to that part in the book about how she was, you know, a ‘cutting linguist’ — I think is what Gillian wrote — I was moved by the idea that these memories were so painful that she recorded them so she would never forget what it was really like. So each word encompasses the theme of the episode.”

Ashley Boucher contributed to this story.