Simu Liu in the first trailer for “Women Is Losers,” a period drama that premiered at this year’s SXSW Film Festival, plays a man in 1972 San Francisco who looks to help a bright Latina Catholic school girl rise from poverty, find her own place and plan for her future.

“Women Is Losers” is named for the Janis Joplin song of the same name and stars Lorenza Izzo as a young woman who manages to survive her difficult home life and looks to marry a soldier in Vietnam, only to face a series of obstacles that inspires her to save money and get out of her oppressive conditions. And the trailer shows that Liu is there to help when she needs it most.

“It’s smart to save money. There’s not a lot of girls doing that these days,” he says to her. “You want to buy a house so you can never be kicked out.” 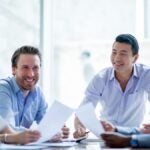 In addition to premiering at SXSW, where it was one of the most viewed titles out of the festival and earned strong reviews, it also won film festival prizes in Cleveland, Oxford and Columbus.

“Women Is Losers” will debut Monday on HBO Max. Check out the trailer here and above.