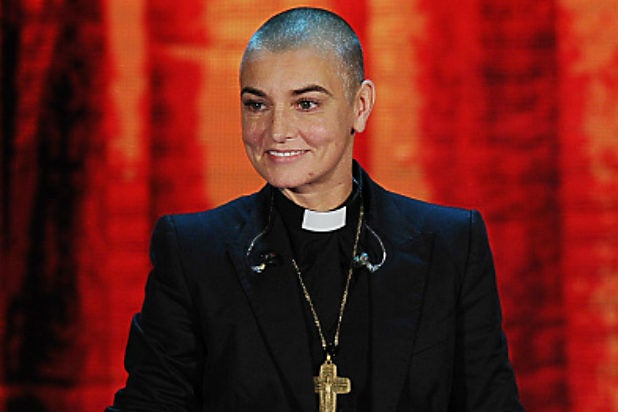 Sinead O’Connor is safe and sounding off after reports that she was suicidal and contemplating jumping off a bridge in Chicago.

The “Nothing Compares 2 U” singer fired up her Facebook account to dismiss claims that she was planning to take her own life and to point fingers at the person she felt was responsible for the report.

“Oh and by the way it’s bulls— I jumped off a bridge, some stupid bitch up at Swords Garda [police] station decided she’d like to throw a bit of false and malicious gossip about is all),” O’Connor wrote, adding, “AM FAR TOO FUCKING HAPPY FOR THAT!!”

As reported on Thursday, police in Chicago received a call from a counterpart in Ireland, saying that O’Connor had called and said she was on a bridge in Chicago and planned to jump.

O’Connor has made suicide threats in the past. In November, O’Connor claimed in a Facebook post that she’d taken an overdose.

“There is no other way to get respect,” the singer wrote at the time. “If I wasn’t posting this, my kids and family wouldn’t even find out.”

In May, police in Wilmette, Illinois, embarked on a search for O’Connor after she went missing for more than 24 hours. She had reportedly gone on a bicycle ride out of the city and did not return more than a day later. 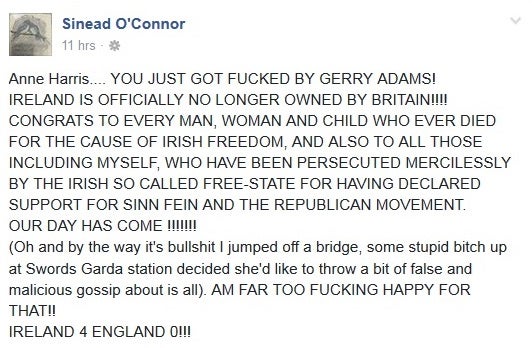 The singer was also recently slapped with a $5 million lawsuit by Arsenio Hall, after O’Connor claimed that Hall had provided drugs to recently decn Prince.