Comic book writer Stan Lee, best known for his work with Marvel Comics, would have been 99 years old on Tuesday — and might have been stunned to watch his creation, sticky super-hero Spider-Man, swing through the pandemic-troubled holiday weekend to gross more than $1 billion at the box office in “Spider-Man: No Way Home.” The movie, made by Sony and Disney’s Marvel Studios, has become Sony’s highest grossing movie of all-time in U.S. box offices, Sony Pictures Entertainment said Sunday.

But the box office blitz did not prevent stars, fans and even the Academy of Motion Picture Arts and Sciences from remembering Lee’s birthday. He died in 2018 at age 95 after creating such comic legends as Spider-Man, the X-Men, Dr. Strange and more than a few of the Avengers, including, the Hulk, Iron Man and Thor.

Among the those weighing on social media was Mark Ruffalo, who played Bruce Banner and his green alter-ego Hulk “The Avengers,” “Iron Man 3,” “Avengers: Age of Ultron” and many other Marvel films. And although Jennifer Lawrence, who portrayed Mystique/ Raven in three X-Men movies, did not offer her own Tweet on the subject, countless fans and friends republished photos of Lawrence and Lee smiling together at ComicCon 2015.

Many others chimed in with birthday wishes for Lee, some independently and some via Lee’s own very active Twitter account (@TheReal Stan Lee, independently powered by Lee’s company, POW! Entertainment. A sampling:

Lee also appeared in blink-and-you-miss-it cameos in 37 Marvel character films, including most recently 2018’s”Deadpool 2,” in which he appeared not in the flesh but as a huge wall mural image featuring his face — leading the AMPAS to ask in a tweet, “In honor of his birthday, what’s your favorite Marvel cameo by Stan the Man?”

For a complete list, check out TheWrap’s compilation of Lee’s cameos below. 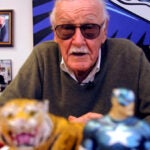