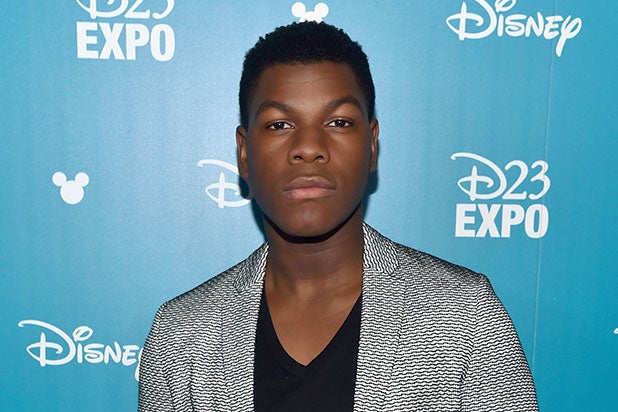 “Star Wars” newcomer John Boyega thinks the racist reaction to his appearance as a Stormtrooper in the first “Force Awakens” trailer was “unnecessary,” and asked that minority of critics focused on his skin color a very reasonable question: “I’m in the movie, what are you going to do about it?”

“You either enjoy it or you don’t,” Boyega, who plays a young Jedi in the seventh installment of the franchise, told V Magazine in a new interview. “I’m not saying get used to the future, but what is already happening. People of color and women are increasingly being shown on-screen. For things to be whitewashed just doesn’t make sense.”

It’s not the first time Boyega has addressed the backlash from some fans complaining about the possibility of black Stormtrooper, citing the prequels as proof that the imperial army consisted of “white clones.” Other interpretations of the “Star Wars” universe argue against that theory.

“To whom it may concern… Get used to it,” he wrote with a smiley face on an Instagram post nearly a year ago.

The reaction from fans concerned about co-writer and director J.J. Abrams deviating from the movie universe they’ve come to love so much since George Lucas introduced the galaxy far, far away in 1977 echoes initial reaction to Michael B. Jordan playing the Human Torch in Fox’s “Fantastic 4” reboot. (As it turned out, though, that should have been the least of Marvel fans’ concerns, since the movie was criticized by its own director before being met with terrible reviews upon release.)

Also Read: 'Fantastic Four' Star Michael B. Jordan on Black Human Torch Backlash: 'It Used to Bother Me, But It Doesn't Anymore'

Boyega takes the lead as Finn in “The Force Awakens.” Although he confirmed at a panel earlier this year that the character does indeed start off as a stormtrooper, more trailers showing him wielding a lightsaber suggest he’s much more than a soldier fighting for the remnants of the Galactic Empire.

The role, he says, is a big step away from the stereotypical roles black actors have been “forced to take” in the past. Boyega’s credits include “Attack the Block,” in which he played a young thug, and “Half of a Yellow Sun,” starring alongside Chiwetel Ejiofor and Thandie Newton.

“All the films I’ve done have had a secret commentary on stereotypical mentalities,” he says. “It’s about getting people to drop a prejudiced state of mind and realize, ‘Oh shit we’re just watching normal people.'”

“Attack the Block,” a 2011 comedic science fiction film about aliens landing in the middle of a rough apartment complex in England, was actually the beginning of Boyega’s journey into one of the biggest blockbuster franchises of all time.

“There was already contact between me and J.J. He was a big fan of ‘Attack the Block’ and we were waiting for a project where we could collaborate,” Boyega said. They wanted to make sure they got the right person for the job. I learned that I got the part over a nice breakfast in Mayfair. J.J. said, ‘John, you’re the new star of ‘Star Wars,” and everything froze for a moment.”

And a big star who rose to fame in front of the camera is helping him maneuver his way through the pressures that Hollywood fame can put on a young actor.

“I’m being mentored by Robert Downey Jr. at the moment,” he said. “He’s helped me prepare for how my life is going to change and that has been inspiring. I’m talking to someone who understands the power of choices, both positive and negative.”