The right to vote has never been and never will be the answer to inequality. Suffrage is an important first step towards fairness and dignity, but, especially in the short term, it’s also largely a symbolic victory. As any Democrat in Texas or Republican in California voting for president can attest, the ballot is a potent emblem of power — but that’s not the same thing as wielding actual influence.

“Suffragette” derives its considerable intellectual and emotional might from recognizing that symbolic nature of the vote. Centered on the fight by British working-class women for enfranchisement, the film is an inspirational tragedy — one that celebrates the courage and shrewdness of the defiant women who made monumental progress, while also subtly acknowledging the limitations of the ballot to correct injustice.

After decades of being ignored, these suffragettes have a new motto: Deeds, not words. (It’s refreshingly nuanced to see a post-9/11 picture take an ambivalent stance toward terroristic tactics, especially given the popularity of vandalism and bombings among certain left-leaning groups in the 20th century.) Determined to reestablish order and male dominance is Inspector Steed (Brendan Gleeson), who regards the violent extremists as dangerous pests.

The film traces the radicalization of Maud (Carey Mulligan), a laundress who has no idea how much will eventually be wrenched from her when she takes the place of already-politicized co-worker Violet (Anne-Marie Duff) at the last minute to testify in front of Parliament about what the vote would mean to her. (Her fellow laundress’ face has been beaten too black and blue for her to show it in public.) The shy, soft-spoken Maud hasn’t ever given much thought to how the ballot might improve her life, but she knows she sees unfairness everywhere around her. Possibly for the only time except when she’s with her young son, her face lights up at the thought that there might be something better for her, if only she had the chance to fight for it. 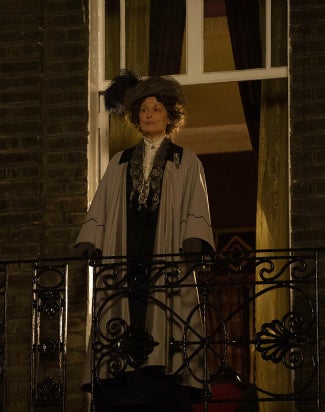 For reasons unexplained by the filmmakers, most of polite society considers the suffragettes shameful and treats them like they might a prostitute. The more Maud embraces the movement’s values and stratagems, the greater an outcast she becomes. Her husband (Ben Whishaw) kicks her out of their home and forbids their child from seeing his mother, eventually resorting to outrageous (yet heartbreakingly believable) lengths to permanently cut off contact between mother and son. On the frontlines of the movement, Maude and her fellow activists are beaten and kicked, surveilled, imprisoned, force-fed, anything but killed. The most powerful symbol the suffragettes can have, other than the ballot, is a martyr.

Suffering and sacrifice make up much of the film, but “Suffragette” wisely doesn’t just rely on agonied hagiography to make its central characters sympathetic. Instead, their problems are all too upsetting and relatable: Maud and Violet face sexual assault, domestic violence, workplace harassment, and unequal pay. Nearly a century after the U.S. and the U.K. enfranchised its female citizens, these issues still plague our societies, which illustrates just how relatively small an achievement they were fighting for in the centuries-long fight for women’s equality. That larger context — which is implied but not made explicit in the film — makes Maud’s struggles both vital and painfully minor. Her willingness to subject herself to such enormous sacrifices for such an abstract goal makes her something of a mark, as Inspector Steed half-rightly observes.

Gavron and Morgan have been criticized for “whitewashing” the U.K. suffrage movement, though at least one historian has opined that British society at the time may have been too racist to welcome women of color into their organizations. The filmmakers do, however, provide a stirring if rosy view of how wealthier women banded together with their less well-off comrades. The neighborhood pharmacist (Helena Bonham Carter) and the suffragettes’ would-be benefactor (Romola Garai) are forced into pockets of sexism that have since been eradicated. Even among women, the law prioritizes the affluent, as demonstrated by closing credits that note that upper-class ladies won the right to vote a decade before the rest of British women did.

Sweat-dampened Maud, on the other hand, dwells in a London of muddy roads and gray air, her 24-year-old shoulders already showing varicose veins from the physically demanding work she’s had to take on since age seven. If she’s going to have a hard life, she figures, she might as well do it as a soldier. Her most concrete gains are a medal (honoring her first prison stay) and a Pankhurst tome that names the long list of activists, from the author on, who have passed on the book to a fellow fighter — one of the few ways the most extreme of the suffragettes could claim each other as a community outside of a clandestine meeting. Perhaps the only other time when they’re allowed such camaraderie is when they’re gathered outside of a rare, semi-secret Pankhurst address and the little-seen prophet of the movement declares with an aggressive smile, “I’d rather be a rebel than a slave.” (Unlike the film’s ill-conceived t-shirt campaign, that iconic line works, but fails to arouse, as part of a longer speech.)

The women’s movements are routinely and depressingly ignored by the movies. But “Suffragette” isn’t just a dutiful corrective, a lid to cover up a gap, but a necessarily distressing exploration of how much a political vanguard will push and endure to set things right — and how fiercely and eagerly a society that’s resistant to change will punish them for it. But perhaps what’s most bittersweet about the film is its reminder, even after Maud and company’s success, that the fight for women’s suffrage is ongoing. End titles observe that Swiss women have only had the ballot since 1971, while Saudi Arabia promised its female citizens the vote this year.

“Suffragette” is a moving tribute to the pain that progress often exacts — and a hopeful prayer that this century’s voting activists will be spared the sacrifices their foremothers could not escape.