The rebranding of the Sci-Fi Channel to “SyFy” may be the subject of derision — and worse – among fans and the media, but they’re sticking by their guns.

“I’ve received less than 20 emails from people complaining about it,” channel president Dave Howe told TheWrap. “People may not appreciate the name now, but in a year’s time, nobody will bat an eyelid. Sci-Fi will be Syfy.”

That may be wishful thinking. 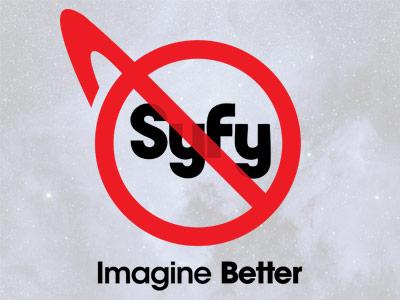 Even the outside branding agency hired by the channel to help with the campaign threw its client under the bus a few days after the decision was announced, with Landor Associates executive director Ken Runkel telling the New York Post that the Syfy name was “generated internally and pre-tested at the channel before our involvement.”

And a high-ranking executive for the channel described for TheWrap the moment when he first heard what will become the cable network’s new moniker on July 7.

“It was definitely a moment where you were thinking, ‘This is either the worst name in the world … or it’s the best name.’"

“I had to basically not say anything for a few minutes,” added the exec, choosing his words carefully.

Since the NBC Universal-owned cable channel first announced its rebranding initiative in March — an effort to broaden its audience profile beyond spaceship-loving males — the marketplace has said plenty, most of it unkind.

There were sophomoric jokes about how the new name reminded some of syphilis, but the dissonance has gone far deeper than that.

Ad Age may have been the harshest, asking, “Should we start a Syfy death watch?”

For his part, channel president Howe is still doing press interviews more than three months after the announcement, attempting to explain the rationale for the change.

With the network expanding from 15 to 50 international channels by the end of next year, it needed a name that could be more easily trademarked.

“At the moment, the term ‘sci-fi’ is not trademarkable anywhere on the planet, even when it’s encompassed with our Saturn logo,” he explained.

There’s also the issue of broadband proliferation, with "Syfy" much more easily searchable than a more generic term.

Indeed, the channel’s newer shows, including “Warehouse 13” — which will premiere the same day the rebrand takes hold — reflect the kind of broader, lighter tone that’s made Sci-Fi’s sister network, USA, so popular.

“We were searching for a brand that was human, relatable and has a sense of humor,” he adds.

That search, Howe noted, lasted nearly two years, and included the vetting of hundreds of names, everything from “Orb” to “Beyond.”

Ultimately, the channel chose a new moniker it felt still retained a little of the old legacy — much like how the Learning Channel chose to become TLC, or Biography became Bio.

And Howe insists that the limited number of Sci-Fi execs involved in the decision were unanimously on board with the name selection, it was thoroughly focus-group tested, and that Sci-Fi brass were prepared for all contingencies.

That syphilis thing? “We knew about that for a year and a half,” he says. “People say, ‘Oh, they didn’t notice this,’ but in fact, we’ve been incredibly thorough.”

Meanwhile, there were proactive steps taken on the internet, with domain names like “syfysucks.com” purchased by the channel in advance.

Unfortunately, there were only so many contingencies Howe and his team could build in.

The website “nosyfy.com” urges visitors to complain to Howe directly, and even gives them his email address to do so. The site even mocks the channel’s new “Imagine Greater” tagline with one of its own, “Imagine Better.”

Then there’s Poland, where, apparently, the verbal relationship between Syfy and syphilis is extremely close for a name designed for international travel.

“Chances are that if you make up a word, it’s going to have other connotations,” Howe said.