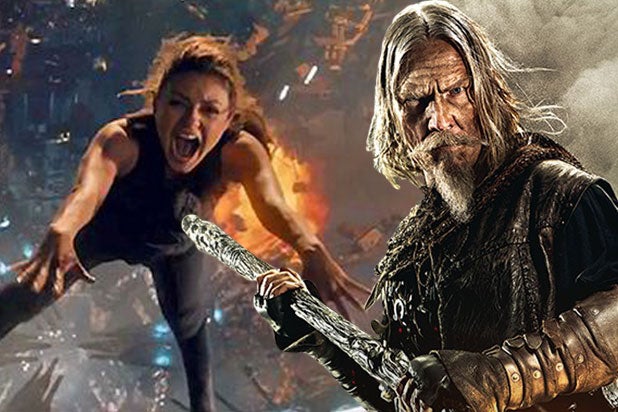 “Jupiter Ascending” and “Seventh Son,” two pricey epics conceived as blockbusters that instead have languished in delayed-release limbo, finally get their shot at this weekend’s box office.

Andy and Lana Wachowski’s sci-fi space opera “Jupiter Ascending,” which stars Channing Tatum, Eddie Redmayne and Mila Kunis, was envisioned as a franchise when development began at Warner Bros. back in 2009. Special effects work, marketing tweaks and a series of changed release dates all contributed to the holdup on its rollout.

Legendary Pictures was still partnered with Warner Bros. when it launched “Seventh Son,” the fantasy epic based on Joseph Delaney’s novel “The Spook’s Apprentice,” starring Ben Barnes, Jeff Bridges and Julianne Moore. Post-production work prevented it from making its original February 2013 release date, and when Legendary was leaving Warner Bros., it was shelved again. Universal Pictures took over the rollout in 2013, and pushed it from January 2014 before settling on Friday.

They’ll both be in the rearview mirror of “The SpongeBob Movie: Sponge Out of Water” starting Friday. The animated film based on the hugely popular Nickelodeon TV character is expected to open north of $35 million for Paramount Pictures, ending the three-week reign of “American Sniper” atop the box office.

“Jupiter Ascending” will debut at around $20 million and “Seventh Son” may hit $10 million for Legendary’s current distribution partner Universal Pictures, the analysts say. But there’s more to the story. At $175 million, for example, the budget on the Wachowskis’ space saga is nearly twice that of Legendary’s mystical adaptation, too.

Big budgets, long-and-winding roads to the big screen, Warner Bros. roots and the same young male target demographic aren’t all they have in common. Both of the teams behind these movies could use a hit.

The Wachowskis are coming off three straight box-office bummers: 2012’s “Cloud Atlas,” 2008’s “Speed Racer” and 2003’s “The Matrix Revolutions,” the second sequel to their 1999 blockbuster.

And if things play out as expected, this will be the first time that Legendary has had two straight flops since it was launched by Thomas Tull in 2000. The sky isn’t falling for the company behind the blockbuster “Dark Knight” and “Hangover” franchises, not with “Jurassic World” and Guillermo del Toro’s “Crimson Peak” coming later this year. But the $70 million cyber thriller “Blackhat,” its first film released with Universal, bombed three weeks ago.

Advance sales for “Seventh Son” are soft, there aren’t any reviews and on social media it’s comparable to “Pompeii,” the volcano epic that tanked last year.

The PG-13-rated “Seventh Son” tells the tale of Tom Ward (Barnes), the seventh son of a seventh son who has mystical powers and apprentices with Master Gregory (Bridges) to battle the witch, Mother Malkin (Moore).

Also Read: Mila Kunis Reveals She Never Planned to Get Married — Until She Met Ashton Kutcher

“Jupiter Ascending” was inspired in part by “The Wizard of Oz” and Homer’s “The Odyssey,” according to Lana Wachowski, who wrote, directed and produced with brother Andy.

It had a special premiere at the Sundance Film Festival, but the critics aren’t sold. It’s at 38 percent positive on Rotten Tomatoes. Sci-fans have not moved the social media needle for it either, and its profile is lower than that of the “Robocop” remake, which opened to $21 million on this weekend last year for Sony Pictures.

Douglas Booth and Sean Bean co-star in the film, which features music by Michael Giacchino and is also produced by Grant Hill. It will be in more than 3,150 theaters.

“The SpongeBob Movie” is debuting one year after another animated movie, “The LEGO Movie,” opened to $69 million on this weekend and became a breakout hit for Warner Bros.

“SpongeBob” won’t go that high for Paramount Animation and Nickelodeon Movies, but it could hit $40 million. That’s because tracking shows it’s resonating with teens and young adults in addition to kids, as “The LEGO Movie” did. On social media, the yellow fellow is ahead of “LEGO” at a similar stage on Facebook but behind it on Twitter. And it’s at a solid 73 percent positive on Rotten Tomatoes.

Antonio Banderas, Tom Kenny, Clancy Brown, Rodger Bumpass, Bill Fagerbakke and Carolyn Lawrence appear or do voice work for “Sponge Out of Water,” which has a $75 million production budget.