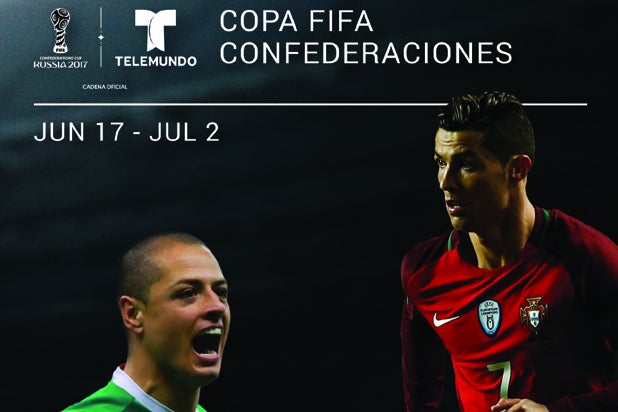 The FIFA World Cup is the world’s most widely viewed sporting event, as 32 soccer powers from across the globe get together every four years to compete for a solid gold trophy and major bragging rights. But for Spanish-language broadcaster Telemundo, next year’s tournament has even higher stakes because of its appeal to an increasingly important bilingual group of Americans — and the fact that it’s one of the few shows on linear TV that seems to be drawing a growing audience.

NBCUniversal’s Telemundo just finished broadcasting what’s essentially the tournament’s dress rehearsal, the FIFA Confederations Cup in Russia. The eight-team tournament takes place in the same host country as the following year’s big show and is designed to get everyone, from teams to local partners to facilities managers, ready for the main event. And more importantly for Telemundo, its coverage of the Confederations Cup drew strong traditional TV ratings, no small feat in the cord-cutting era.

Telemundo’s Confederations Cup broadcasts averaged 1.2 million total viewers and 605,000 adults between 18 and 49, which topped Univision network’s telecasts of the 2009 edition of the tournament in South Africa, which aired at similar times, by 47 percent and 29 percent, respectively. (The 2013 Confederations Cup in Brazil benefited from games in prime time.)

Also Read: Why Mexico Is So Important to Fox Sports' Confederations Cup Coverage

“When you can increase the TV audience eight years later — when you look back on any prime time show — that’s something,” Telemundo Deportes President Ray Warren told TheWrap.

Telemundo can and should be expected to dominate among Spanish-only speakers, but as the country’s bilingual audience grows, Telemundo is looking toward capturing more of an increasingly economically powerful viewing bloc.

While Telemundo’s broadcasts are exclusively in Spanish, it has a secret weapon that works in any language, announcer Andres Cantor, famous for his prolonged “gooooooooooal!” call.

“I don’t think anybody does a better job than Andres Cantor,” Warren said. “He’s excited about the goal and he doesn’t play favorites.”

Another factor that helped Telemundo perform well among that bilingual audience was the fact that watching national team soccer is often a social viewing experience where second- and third-generation Americans gather with family members to root on the (ancestral) home team.

“I think a lot of that has to do with people kind of go home,” he said. “They get together with families, they get together in bars. They go back to their roots. That’s kind of the place we live in.”

The Spanish-language audience in the U.S. is hardly monolithic, and Warren compares its factions to regional sports fan bases who tune in in force to watch the Chicago Cubs or Golden State Warriors — but maybe not other baseball or basketball teams. That’s why it’s important to cater to each game’s particular demographic, Warren said.

And while the Confederations Cup which is essentially a warmup for the main event next year, Warren said Telemundo plans to continue promoting the World Cup through the last few rounds of the tournament’s qualifying matches in the fall as well as during English Premier League matches, which Telemundo has the Spanish-language broadcast rights to.

“I call the Confederations Cup ‘off-Broadway,'” Warren said. “It kick-starts and gets everybody’s mind turned toward the World Cup. Were going to be running World Cup Qualifiers. There’s a lot of national team players on English Premier League teams.”

And while the World Cup in Russia won’t work as favorably with American TV schedules as the last tournament in Brazil — Rio de Janeiro is just one hour later than Eastern Time — Telemundo also plans to make up for the time zone issues with technology. Warren said fans looking to follow the tournament via Telemundo’s streams have been “blowing up the App Store” downloading the network’s mobile app. And although Telemundo has been lucky with a growing linear TV audience, you can’t broadcast anything in 2018 without a streaming component.

“The biggest answer what we’re doing about the time difference: streaming,” he said.

“In Hawaii you stay up all night to watch the NFL at 6 a.m.,” he said. “Sports fans are elastic — they stretch.”