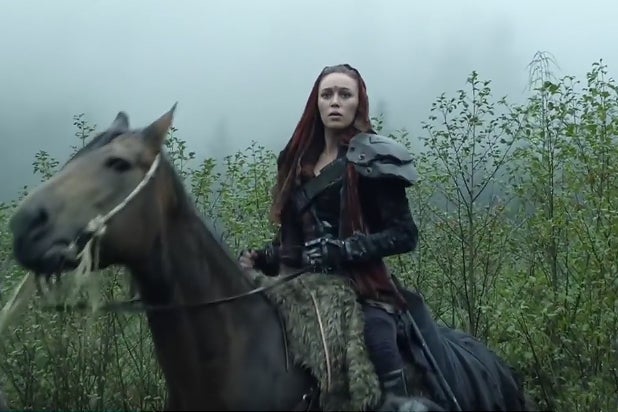 Season 3 of “The 100” is underway, but fans are still anxiously awaiting a character who hasn’t made an appearance yet: The grounder commander Lexa, played by Alycia Debnam-Carey.

At the recent Television Critics Association winter press tour, Debnam-Carey sat down with TheWrap to talk about stepping back into Lexa’s shoes.

Also Read: 'The 100' Showrunner: Things 'Spiral Out of Control' in Season 3

In Season 2, the show left off with Lexa betraying Clarke (Eliza Taylor) and Debnam-Carey revealed how Lexa is still dealing with the aftermath of her choice.

Where do we catch up with Lexa when we see her again?
We’ve just come off the back of Lexa making a very tough choice, where she picked her people first, which she will always do. Her priority is to her people and she’s had to sacrifice a lot for that. She’s angered the one person that she’s found some sort of sanctuary or solace with. It would be naive to think she doesn’t feel that. Of course, she’s a very hardened person and she keeps her cards close to her chest, but at her core, she’s had loss and experienced that, so having to betray Clarke in a certain way, that’s a tough place to come back from.

However, with Lexa, she’s very pragmatic. There’s never a doubt in her mind that if she wants what she wants, she’ll get it. For her, it’s all about choice.

Also Read: 'The 100' Extended Trailer Teases Everyone at War (Video)

How do you think Lexa reacted when she found out Clarke was alive? Do you think she ever worried about the repercussions of her choice?
I don’t think she cares. I’m sure she’ll be like, ‘OK, this person is obviously going to be very hostile towards me.’ There’s relief in knowing Clarke is still alive … She [Lexa] always knew she was going to make it out. Now those cards are back on the table, if she wants to restart an alliance or whatever else. Lexa will just always get what she wants.

We learn a lot more about Lexa and the grounders this season. Was there anything that surprised you?
It was fascinating to get to see the grounders traditions in more in-depth focus. We get to explore their spiritual ways, their traditions, the 12 clans, their politics. And we finally have everyone on the same planet. It’s not people in the sky, the ground, the City of Light. It’s all coming together and everyone’s sort of in the same realm. They’re playing by grounder rules. There’s obviously hostility with some characters, and there’s a fine line between who you can trust and who you can’t. You used to be able to tell by their uniform, what they’re wearing, but now it’s not so clear. I love being able to explore the grounder ways. The language, the traditions, swordfighting!