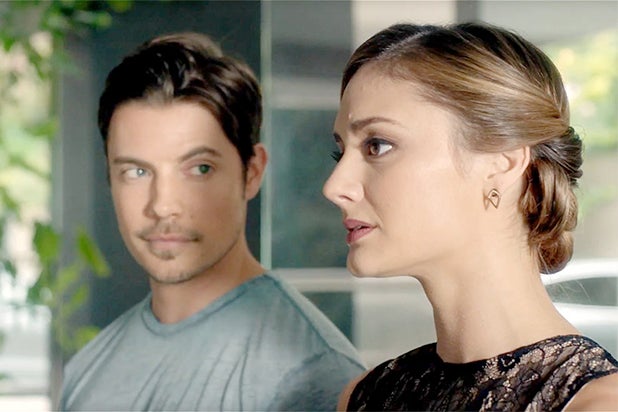 “The Arrangement” is really, really not about Scientology, according to the cast and executive producer of the new E! drama.

“It really isn’t,” showrunner Jonathan Abrahams said a the Television Critics Association panel earlier this year, answering the first (of many) questions about whether the marriage at the center of the show has any parallels to celebrity marriages within the movement created by L. Ron Hubbard.

The first episode of “The Arrangement” sees newcomer Megan Morrison (Christine Evangelista) impressing the world’s biggest movie star Kyle West (Josh Henderson) so much in their audition together that he whisks her off to an amazing first date on his private jet. She’s soon presented with a marriage contract for $10 million.

Henderson was asked whether he ever studied prominent Scientologist Tom Cruise’s personal life or history to prepare for the part.

“Not at all,” he said. “I just saw this as a truly unique story that takes place in Hollywood and our characters are very unique in their own right.”

Abrahams also insisted that the organization at the center of “The Arrangement,” The Institute of the Higher Mind, unlike Scientology, is not a religion at all.

“It’s not a religion, it really is not a religion. I don’t mean that coyly,” he said. “This is not a show about faith, that’s not the underlying theme, of ‘Do you believe or do you not believe?’ There are shows out there that examine that, but for me, it was really about — Hollywood is such an aspirational town, these self-help organizations are about aspiring to a higher way of living. Having more success in your profession, in relationships, a more fulfilling life is promised to you. ‘Come join our thing, do our program, spend X amount of dollars for the weekend intensive, and you can change your life.’ To me, that’s not really about faith, it’s about hope, aspiration. So, definitely not a religion.”