“The Brothers Grimsby” is funny. Get over it. I say this because I was certain it’d be yet another middling spoof of Bond films along the lines of Rowan Atkinson’s “Johnny English” movies, or worse, the ill-conceived and poorly executed Melissa McCarthy espionage comedy “Spy.” “The Brothers Grimsby” isn’t any of those; as noted, it’s funny.

Directed by Louis Leterrier, (“Now You See Me”) and written by co-star Sacha Baron Cohen, with Peter Baynham (“Alan Partridge”) and Phil Johnston (“Zootopia”), the film spends all of about 40 seconds setting up the premise, which proves to be 20 seconds more than necessary.

Sacha Baron Cohen plays Nobby, the idiot amalgam of his three previous principal characters: the clueless Ali G, the boorish Borat and the outlandish Bruno. But Nobby isn’t as bright as any of them. His chief, and perhaps only, virtue is his big heart. Twenty-eight years ago Nobby’s little brother Sebastian disappeared. The adult Sebastian is played with all the alacrity of a head-shaved Bud Abbott by the naturally bald Mark Strong (“Kingsman: The Secret Service”).

Baron Cohen and Strong are not at first glance an obvious comedic duo. Yet there they are — funny, just like the film itself. Which is odd, since it’s such a bad movie. Often nonsensical and full of lousy filmmaking pretending to be avant-garde art cinema, it’s certainly as tasteless, tacky and cringe-evoking as anything Baron Cohen ever conceived. But the raunchy awfulness of “The Brothers Grimsby” is overwhelmed by a constant flow of chuckles, guffaws and flat-out belly laughs it elicits throughout. 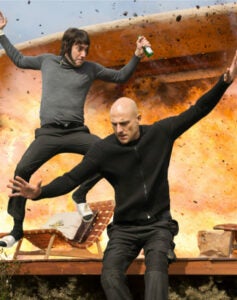 Do note, it’s not dumb. Stupid, occasionally, but never dumb, not even when our heroes are inside the elephant vagina. There’s always a little bit of commentary going within or alongside the lunacy. Something about our gun culture, or about sex and sexuality, about our narrow standards of beauty, and definitely about community and family. It’s pretty savvy about a number of things, but it never lets that get in the way of the laughs.

The smarts of “The Brothers Grimsby” amidst its silliness is less surprising than it might be. Leterrier is mostly a stager of action who makes sure everyone hits their marks, but Baynham, who created the “Alan Partridge” series with Steve Coogan, is an old school British television wit. And Baron Cohen, for all his character antics and well-over-the-edge silliness, is a Cambridge-educated history graduate.

As Baron Cohen’s career matures past the characters he created, he’s still willing to play the fool, but in “The Brothers Grimsby,” his Nobby is the butt of the jokes rather than some unsuspecting dupe who doesn’t even know he’s in a movie. That turns out to be more satisfying, because a self-deprecating ass is always more charming than the regular kind.