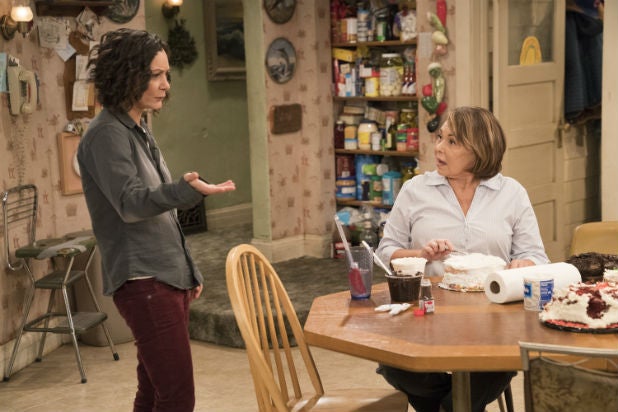 ABC has officially ordered a spinoff of “Roseanne” after canceling the sitcom last month, but fans aren’t quite sure whether to be excited or not.

ABC said that the former star will not have any creative or financial participation in the new series.

“I regret the circumstances that have caused me to be removed from Roseanne.  I agreed to the settlement in order that 200 jobs of beloved cast and crew could be saved, and I wish the best for everyone involved,” Barr said in a statement.

“We are grateful to have reached this agreement to keep our team working as we continue to explore stories of the Conner family,” executive producer Tom Werner added.

The cast released a joint statement at the same time, expressing their happiness at being able to continue the show without Barr.

“We have received a tremendous amount of support from fans of our show, and it’s clear that these characters not only have a place in our hearts, but in the hearts and homes of our audience,” their statement said. “We all came back last season because we wanted to tell stories about the challenges facing a working-class family today. We are so happy to have the opportunity to return with the cast and crew to continue to share those stories through love and laughter.”

Fans, however, were slower to express happiness at the Conner family’s big return.

“Yuck. This is really stupid,” one Twitter user said after the news broke. “So are they just gonna pretend the loudmouth matriarch of the clan just doesn’t exist?”

“This has to be one of the most shameless moves in TV history,” another user said.

But others were excited.

“This is exactly what I said they should have done,” another Twitter user wrote. “So happy everyone who should be involved will be.”

“This is how we should deal with every racist, homophobe, anti-immigrant, conspiracy-spewer, and miscellaneous deplorable: move on without them,” someone else tweeted.

Blacklisted! But Peter Fonda can threaten a child with rape? Really America? Are we going to stand for this? How can you have Roseanne without Roseanne?? https://t.co/kGvlR9oU8e

An early look at the opening scene of THE CONNERS pic.twitter.com/ZfInAQPCCG

Yuck. This is really stupid. So are they just gonna pretend the loudmouth matriarch of the clan just doesn’t exist? Hate that innocent people lost jobs but it shouldn’t have even came back > ‘Roseanne’ Spinoff ‘The Conners’ Ordered by ABC https://t.co/1pr79e3JSc via @variety

IMO: The stars of "The Conners" deserve to work and they deserve better than having to deal with the questions and ramifications and ripples and associations that this puts them in line to deal with. Shrug.

The Roseanne free 'Roseanne' is now called 'The Conners' & gets a season order, this has to be one of the most shameless moves in TV history https://t.co/DvbFXQxYkY

Who said they wanted a Roseanne spinoff called "The Conners".

Just give it up. Roseanne is a disgusting, rabid Trump supporter and no matter what you call the show her footprint will be all over it.

#Roseanne spinoff for when you don't want to be called a racist but still want the racism-dollars.

Maybe #TheConners begins with Roseanne undergoing plastic surgery that completely changes her appearance, and someone else takes over playing the character. pic.twitter.com/P9Nbwtp7S3

The #Roseanne cancellation was actually a blessing and #TheConners should not come back at all.

THIS IS EXACTLY WHAT I SAID THEY SHOULD HAVE DONE!! SO HAPPY EVERYONE WHO SHOULD BE INVOLVED WILL BE!! #TheConners https://t.co/jj0zVXjM90

This is how we should deal with every racist, homophobe, anti-immigrant, conspiracy-spewer, and miscellaneous deplorable: move on without them. #TheConners https://t.co/Jf03spwMQW

Hahahahahahah???? Nobody ain't gonna watch this at all ???????? just cancel the show #theconners #roseanne https://t.co/GdxRPUnN9Q

I ❤️me some Darlene, but #theconners will never be #Roseanne without @therealroseanne. Sigh.