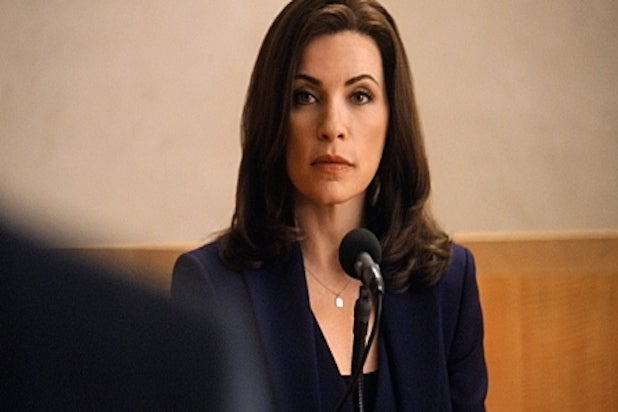 (Spoiler alert: Do not read if you have not watched the series finale of “The Good Wife.”)

To begin as we recap the series finale of CBS’ “The Good Wife,” let’s acknowledge the elephant in the room: Yes, creators Robert and Michelle King pandered to audiences by bringing back Josh Charles‘ Will Gardner as… the Ghost of Christmas Present?

And like so many callbacks over the last few episodes, it’s a mostly wasted effort since Alicia seemed to have recovered from that lost love shortly after her laundry room breakdown. Hasn’t she moved on to Jeffrey Dean Morgan‘s Jason? But who cares when it comes to a series finale? The writers will never have to please us again.
In that same vein, surprise! Despite last week’s cliffhanger, the verdict in Peter Florrick’s trial is not in; the jury merely has a question. (How did that message get so confused?)

And so the episode pivots from then potential fallout of Peter returning to prison to the Scooby Gang at Lockhart Florrick working together to solve a mystery. The whole thing feels very anticlimactic, especially since everything the defense argues in the first half of the episode becomes moot in the second half, and Peter ultimately accepts a year of probation. Along the way, Peter discovers that Eli is telling all of his donors to start backing Alicia’s future political career, who’ll be perceived as strong once she divorces Peter. Alicia doesn’t know anything about this; as usual, the men in her life are too busy planning her future to let her in on it.

That’s the real disappointment in this series finale. Early on, Luca asks Alicia to whom she’d rather come home every day: Peter or Jason? That night, Alicia imagines both scenarios and then a third: Coming home to Will Gardner. Because obviously, Alicia Florrick could never be happy coming home to an empty house. Instead, Ghost Will tells Alicia to run, run, run to Jason and be with him, because she would go crazy if she had to live in her apartment alone!

Also Read: 'The Good Wife's' Matthew Morrison Laughs Off Terrible Movie He Did With Christine Baranski

And what are we left with after seven seasons of watching Alicia struggle to rebuild (and then rebuild again and then again) her life and career? Is she stronger now or is she just emotionally numbed by seven years of taking a beating? What are we supposed to think of the woman we first met when she was publicly humiliated by her husband’s affairs coldly orchestrating the undercutting of Diane’s husband by asking him on the stand if he’d had an affair? Is this an inevitable outcome of a life in the political arena?

So one of network television’s premiere prestige dramas ends with Alicia in yet another unflattering wig, taking her place beside Peter at yet another press conference in an echo of the series premiere. But this time, she leaves the stage early to run after a man she mistakenly assumes is Jason. When she turns around (and this entire sequence has a dreamlike unreality to it), she sees Diane approaching. “Diane?” she asks. Diane whacks her across the face and calmly keeps walking, leaving Alicia to wipe away tears, square her shoulders, and walk into her future.

It’s gratifying in the moment, because didn’t Alicia deserve it, just a tiny bit? Just the way that Peter deserved the slap in the first episode? And it’s certainly on brand, given how many obstacles and hurdles Alicia has had to overcome (even Don Draper occasionally got to be happy). But in the end, what it amounts to is saying goodbye to a character we’ve grown to love over the better part of a decade by watching her get slapped down one last time.

“The victim becomes the victimizer,” Michelle King says in an interview released after the finale ended. (King then goes on to say that Alicia has gained great strength and imply that her newfound strength came at the cost of her morality.) One can’t argue with that after this episode, but one could ask for a little more buildup. Isn’t Alicia Florrick the one who was faced with eviction and a malpractice suit just a few weeks ago? Those aren’t the hallmarks of a victimizer; those are the hallmarks of a woman who can’t catch a break.

“Things used to be simpler,” Alicia says to Will during one of their imaginary heart-to-hearts. Will was only half right when he grins and says, “No, they weren’t.” Things were never simpler on “The Good Wife,” but they were more dramatically satisfying.

'The Good Wife' Is Not Alone: 11 Other Series Finales Fans Hated (Photos)

From “Seinfeld” to “The Sopranos,” even the most beloved of shows can go out with a whimper

Even the most popular shows can disappoint fans with their final installments, TheWrap looks back at other series that went out with a thud.