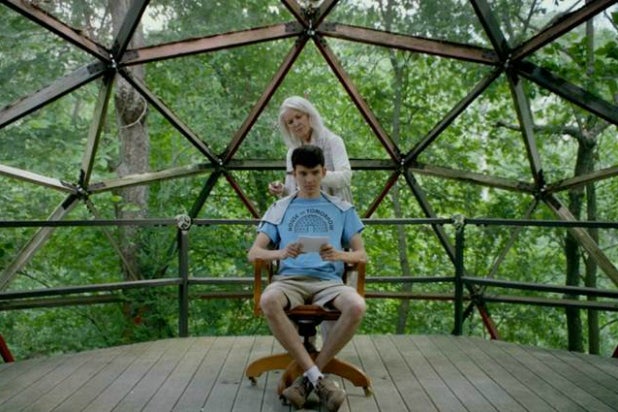 Geodesic domes, predicated on the concept that they could hold more space with less material, never became the ubiquitous buildings that their creator — future-forward architect and thinker Buckminster Fuller — imagined they would.

But “more with less” is a rewarding concept when it comes to indie movies, and writer-director Peter Livolsi’s “The House of Tomorrow” delivers just that in a brisk 90 minutes, telling a sweet, tart, and intelligently life-affirming story of teenage friendship and outsider spirit with a supremely light touch, and a winning collection of performances.

One of Fuller’s residential domes, tucked away in the Minnesota woods, is where we meet Sebastian Prendergast (Asa Butterfield), a 16-year-old student of the endlessly creative, eccentric inventor’s ideas. His interest no doubt has to do with the fact that he’s been raised his whole life under the careful, home-schooled watch of his guardian Nana Josephine (Ellen Burstyn), once one of Fuller’s architect disciples. Together they live like health-conscious ascetics in a dome that’s also a local tourist attraction, one in which Nana greets guests (in the opening scene, a youth group from a Lutheran church) with a big smile and a “Welcome to the future!”

Skinny, polite Sebastian has little experience with the outside world. But in the wake of a stroke his Nana suffers during the church group’s visit, he gets to know one of the kids, Jared Whitcomb (Alex Wolff), a sharp-eyed, combative punk fanatic with a heart transplant scar.

Though same-aged Jared is the opposite in nearly every way to Sebastian — rude to his kind-hearted single dad Alan (Nick Offerman) and snarling older sister Meredith (Maude Apatow), dismissive of the meds regimen that tends to his tenuous health, and in general an inveterate rule-breaker — the pair develop a fast bond over their status as misfits tired of restraints.

Sebastian, enabled by the dad’s Christian hospitality and drawn to Jared’s thrashing music tastes (and maybe a teensy crush on Meredith), starts sneaking away from home to hang at the Whitcomb house, which spurs Jared to insist the pair form a punk duo (with Sebastian learning on a bass guitar stolen from the church).

Any well-seasoned moviegoer will see the feel-good path of world-opening adolescent rebellion embedded into the DNA of “The House of Tomorrow,” which Livolsi adapted from a 2011 novel by Peter Bognanni. But what makes the movie organically enjoyable outside of its expected direction is that the manifestation of Sebastian’s and Jared’s mutually beneficial attachment is, in Livolsi’s hands, a delicate simmer instead of a sentimental splash, and tended to with plenty of deadpan wit and honest feeling. (Not to mention a delectable punk soundtrack, featuring The Germs, Richard Hell, and Black Flag.)

Sebastian’s social flowering isn’t coaxed by a vision of another family’s domestic purity, after all — Alan is devoted to caring for Jared, which Jared answers by lashing out — but rather by the humane dysfunction of inherently good people making do under one roof. (Or, in the case of a few apartment scenes featuring a wonderfully understated Michaela Watkins as Jared’s struggling mom, roofs separated by a divorce.)

Watch Video: Elle Fanning Is a Punk Rock Alien in New 'How to Talk to Girls at Parties' Trailer

For Jared, on the other hand, Sebastian offers not just any old escapist companionship, but an opportunity to reformulate his contempt at being handled like a boy in a bubble into a form of vinegary empathy for another cloistered, treatable patient. At the very least, “The House of Tomorrow” boasts a wise emotional intelligence about what draws us out of our imposed worlds and toward the unlikeliest of enrichments.

The movie’s heart-smarts are bolstered by its actors, starting with Butterfield, who creates the subtlest of transformations from beanpole, alien-like awkwardness (his reaction to his first soda is priceless) to confidently unshackled, wannabe punk. Wolff has arguably the tougher role, but earns our sympathy for his teenage prickliness (and prick-ishness) through his soulful eyes and modulated glimpses at Jared’s vulnerable side.

In the Whitcomb abode, they’re both supported by Offerman’s nuanced portrait of all-in parenting, and Apatow’s nicely turned take on annoyed sister as secretly affectionate sparring partner. And though Burstyn’s character is the least believably drawn, the Oscar-winner — who in real life knew Buckminster Fuller (thus requiring no digital wizardry when you see Burstyn in archival footage of him from the ’70s) — puts in her paces with expectedly vivid professionalism.

For a movie whose hiccoughs and payoffs are expected, and whose seams occasionally show, “The House of Tomorrow” is as engagingly designed and executed as one of Fuller’s nifty, thought-provoking inventions. The ironic truth about Fuller’s legacy is that none of his creations ever truly caught on, and yet the sheer vivacity of his belief in solving earth’s problems with ingenuity proved to be its own kind of enduring gift.

A similar irony can be found nestled in the indie charm of “The House of Tomorrow”: that by bringing together the tear-down ethos of punk with the build-up idealism of Fuller, two broken kids can find a workable equilibrium through which to combat the problems of everyday life.

'Spider-Man: Homecoming': How the Actors' Ages Compare With Their Teenage Characters (Photos)

Are all those teenagers who hang around with Peter Parker really teenagers?

“Spider-Man: Homecoming” largely takes place in the high school of Spidey’s alter-ego, Peter Parker (Tom Holland). Appropriately, it’s filled with high schoolers. But while the characters in the movie are all around the ages of 15 to 18, Hollywood routinely casts actors who are much older in such roles. So how old are the actors of “Spider-Man: Homecoming?” Here are all the kid characters and their actors’ true ages.