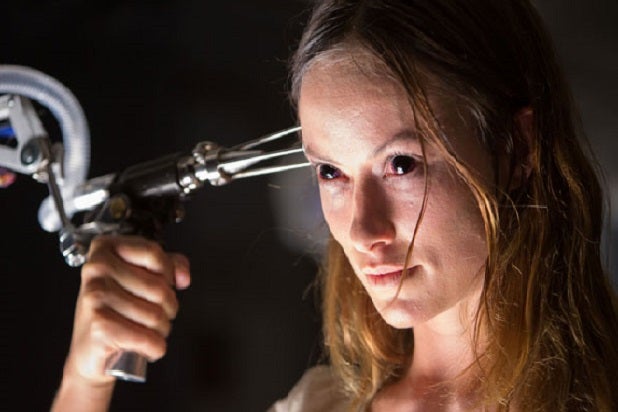 With its deft mixture of new-school psuedoscience and old-time religion, “The Lazarus Effect” marks an impressive narrative debut for documentary director David Gelb (“Jiro Dreams of Sushi”). Starring a cast of young talents and indie stalwarts and backed by the Blumhouse horror-making machine, Gelb’s horror film doesn’t exactly break new ground, but it nonetheless finds plenty to relish in the mouldering bits it stitches together as it gives classic themes about death, life and the soul a literal and figurative shot in the arm.

In Berkeley, California,a small team of scientists is working on a potential medical revolution; led by young doctors in love Frank (Mark Duplass) and Zoe (Olivia Wilde) with technical support from Nico (Donald Glover) and Clay (Evan Peters), the group has seen their work metamorphose over the past three years from a treatment for long-term coma patients to a set of biological and neurological processes that work, essentially, like jumper cables for dead organisms. Videographer Eva (Sarah Bolger) is sent to capture the work for posterity, trying to meld with the tight-knit group as they finally succeed in perfectly calibrating the mix of chemicals and computer-controlled shocks that bring a dead dog back to life.

Duplass and Wilde make for an unlikely pair of mad scientists, young and in love and only occasionally caught on opposite ends of their work-inspired debates about life and death (Is there a soul? Is there an afterlife?) with Frank on the side of cool reason and Zoe willing to entertain the divine. Those philosophical questions get a lot more practical, however, when a lab accident leaves Zoe dead (as already noted by the trailer and poster) and Frank more than willing to jump a few leaps ahead in the scientific process if it’ll save the woman he loves.

With a script by Luke Dawson and Jeremy Slater, “The Lazarus Effect” has commendable aims; it’s the rare horror film that makes its long, lingering looks as important as its swift startling scares, where how the characters live is just as important as how they die. Director Gelb has an excellent eye; the composition of many of the shots have a fearful symmetry to them, whether the straight lines of a hallway or the round curves of an MRI machine. At the same time, the film also incorporates security footage, hallucinations and special-effects driven moments to strong and stirring effect, with plenty of intermittent lighting to help pump its frequent, fun jump-scares.

Duplass (HBO’s “Togetherness”) is handy with the tech-talk of the film; he’s also nicely both perfectly reasonable and, as events grow more desperate, utterly insane, Dr. Frankenstein in flat-front khakis. When Wilde’s Zoe comes back from the dead, she’s not just somehow alive and well, she’s both better and worse, her mind over-firing thanks to the treatment and haunted by visions of her interrupted afterlife. (Film buffs dismissing “The Lazarus Effect” as “Flatliners” for millennials or “Pet Sematary” on campus should look even further back and deeper down into the horror catalog to ’70s psychic psych-outs like “The Fury” and “The Medusa Touch,” which seem to have inspired much of the film’s tone and tenor.) The rest of the cast is also great, turning what could have been thankless parts into nicely-tuned characters.

Production designer Melanie Johnson creates the film’s fairly sealed universe with great style and sensibility, while cinematographer Michael Fimognari brings the same capacity for brightness and shade he used in “Oculus” — another excellent recent horror film — to this work.

There are, to be sure, a few horror-movie head-scratchers in the film (there are cameras everywhere in the lab, except where, of course, there are not cameras) and a couple of bonehead moves on the character’s parts. But with a snappy 84-minute running time propelled by an ever-escalating series of unfortunate and unnatural happenings as what seems like payback for playing God, “The Lazarus Effect” is a smart, unsubtle chiller that should leave even a dedicated horror fan shaken and spooked from its opening scene’s revelations to its final scene’s implications.