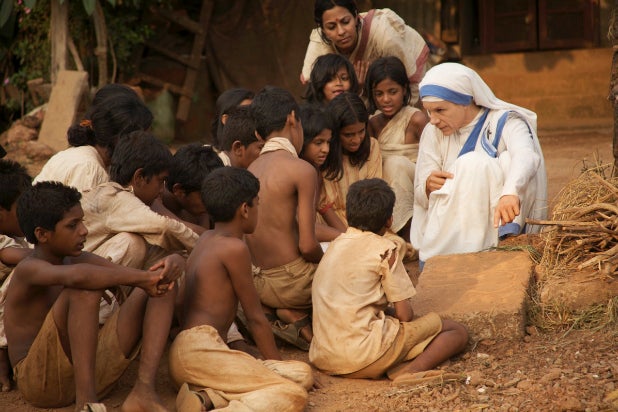 Critics often call biopics overly adulatory of its subjects “hagiographies,” but “The Letters” is an actual case for sainthood on behalf of its protagonist, Mother Teresa. As an opening scene recounts, the Catholic nun (played by a wrinkle-free Juliet Stevenson) allegedly cured one woman of cancer. But the Vatican requires a minimum of two miracles for sainthood, and thus efforts to canonize Mother Teresa have stalled since her death in 1997.

“The Letters” strives to restart the nun’s candidacy for canonization. Written and directed by William Riead (“Island Prey,” “Scorpion”), the feature is as dramatically comatose as it sounds, focusing on the Albanian nun’s attempts to follow her “calling within a calling” by establishing a hospice for Kolkata’s indigent. It’s as punishingly dull as Sunday-school homework — and just as unnecessary.

As can be expected, the script steers clear of the many controversies surrounding Mother Teresa’s work, including the purported mismanagement of donations, the griminess of the facilities under her care, and the nun’s fetishization of suffering, which allegedly led to the withholding of painkillers from the ill. India’s slums and hospitals, too, are sanitized to a brochure-ready spick and span; caring for the sick and dying never looked so good.

Riead squanders multiple opportunities to make his drama into something more than a re-enacted résumé. Mother Teresa’s struggles with Church bureaucracy to leave her job teaching highborn girls within the convent walls and care for the poor instead becoming a debate about the different classifications of nuns. There’s an innate female-empowerment tale to be told about a Sister who inspires her former female students to take up the habit and care for the Untouchables against their parents’ wishes, but that, too, remains unexploited as a source of narrative tension. Likewise, it’s the oft-mentioned but never fully resolved atheism that Mother Teresa professed in her correspondence with a priest that gives the film its title.

Also Read: Pope Francis Gets Rock-Star Reception in US (Photos)

Most of the running time finds Mother Teresa, here in her late thirties and early forties, simply being uncomplicatedly good: teaching children, distributing food to the poor, telling the dying that she loves them. She’s as devoid of an inner life as her comically vile antagonist, a nun in a superior position (Mahabanoo Mody-Kotwal) who wants her to stop helping the poor because it’ll set back the reputation of the school Mother Teresa used to run. 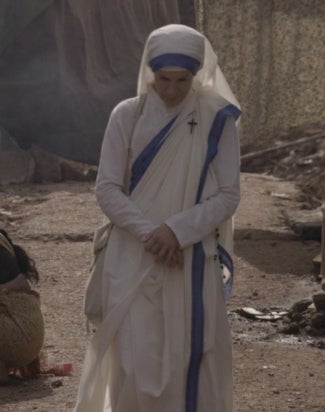 The future Nobel laureate vomits when she first sees a man covered in sores, but she’s toughened up by the time she delivers the breech baby of a Hindu couple who had yelled at her for being nice to one of their other children. Bloodied but stoic after the difficult birth, the nun walks away in slow motion, giving the rescued woman’s husband a chance to catch up to her and thank her on his knees while inspirational music drowns out his words.

Speaking in an accent from Foreignlandia, Stevenson’s never given a chance to do anything more than look beatific (and fake-barf that one time). The nonstop threat of religious violence accompanying the independence and partition of India leads to the only scene with any suspense, when a Hindu mob expresses anger that one of their temples has been converted into a hospital without their being consulted on the matter.

As with so many other moments, Riead uses the incident to lightly scold the Hindus for not taking better care of their own. Naturally, it’s one of the two priests (Max von Sydow and Rutger Hauer) in the framing device looking back on Mother Teresa’s accomplishments who expresses that short-sighted sentiment, for in this retelling, one of the most recognizable women in the world gained international recognition, raised hundreds of millions of dollars, and established an organization that reached over 250 countries simply by being holy. Now that would be a miracle.