An ill-advised attempt to push-start a reboot of the Euro-action franchise that put Jason Statham on the map in 2002, “The Transporter Refueled” is not nearly as charming or crunchy as the originals.

The lumpy, funny, custom-cut Statham is now replaced by the leaner, less fun off-the-rack Ed Skrein. The action’s accent on Russian rogues, lethal ladies and Rivera-set car chases makes “The Transporter Refueled” feel less like a film and more like the world’s most violent Vanity Fair fashion spread, all poses and pouts instead of the two-fisted, rough life of the originals.

The first three films were low-budget B-movies at best — and in our franchise-frazzled age, even they get the chance to be rebuilt as moneymakers with nothing more than the toxically tedious fumes of name recognition in their tank.

Backed by producer Luc Besson, who also gave us the originals, this film has the same set-up: Frank Martin, a.k.a. “The Transporter” (Skrein), works a specific set of jobs in Europe with his highly-specialized skills. He takes any cargo, anywhere, no questions asked with a guarantee of steady work behind the wheel. He takes on a new client, the enigmatic Anna (Loan Chabanol), and finds that she’s got a master plan that goes far beyond having Frank take her from point “A” to point “B,” including vengeance against the Russian flesh-peddler Yuri (played by Yuri Kolokolnikov) who’s kept her in sleazy servitude for years.

Directed by Camille Delamarre, “The Transporter Refuelled” is a fairly rote affair; all the fight scenes are cut too swiftly, shot too closely and designed too awkwardly to have much actual impact beyond the cracks and thuds on the soundtrack. The 2002 original at least had legendary fight choreographer Corey Yuen on board; there’s nothing here as bizarre and bold as that film’s fight scenes. Director of photography Christophe Collette (who previously worked with Delamarre on the ungainly, unnecessary “Banlieue 13” remake “Brick Mansions”) gives the proceedings an appropriately golden glow — it is hard to make Cannes, Monaco and other Riviera locales look bad — but the film’s mixture of grim warehouses and gleaming palaces is pretty standard-issue.

As for Skrein, he is certainly game for the fight scenes and appropriately lean and lethal-looking when shirtless, but he lacks the knowing, blue-collar sardonicism and grit Statham brought to the role. Statham’s Frank Martin looked like he’d survived by tooth and nail to get where he is; Skrein looks like he hopped out of a perfume ad, “Purple Rose of Cairo” style. Ray Stevenson, playing Frank’s dad, puts a welcome bit of charm and sarcasm into the too-serious proceedings; you can’t help but feel that you’d rather watch more of the loose, lightfooted Stevenson than Skrein’s phony stoicism and cheekbone-based acting technique. 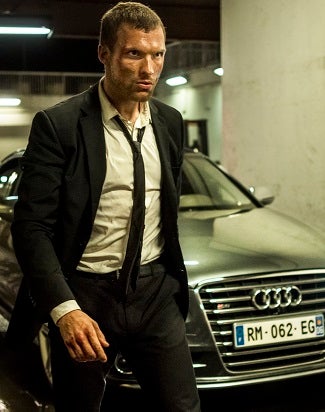 The script is credited to a triumvirate made of Adam Cooper and Bill Collage (of the laughably hammy “Exodus: Gods and Kings,” as well as the Olsen twins vehicle “New York Minute”) alongside Besson. Their work is utter trash and, worse, not even well-made trash. (Besson used to make action films that felt like the antidote for the conventional; now, he just churns out the conventional, like a conveyor belt in a factory, including this bore.) The schemes, scams and scrapes of the plot’s machinations make no sense whatsoever, and the film’s setting among the sex-traffickers of Europe means that every woman we hear speak, with one exception, is playing a prostitute. The one exception is our lead pimp’s right-hand woman Marissa (Noémie Lenoir), an ex-prostitute, but don’t worry: While she’s portrayed as a criminal in her own right, we still get to see plenty of her writhing in her underwear while her partner Yuri makes important calls.

There’s a little romantic subplot between Skrein and Chabanol, but it feels less like romance and more like a child awkwardly holding two very fit plastic dolls by the ankles and making them smooch by mashing their faces together. The original “Transporter” films were hardy filet mignon — more like Hamburger Helper, with a little red meat action filmmaking, a dash of spice and a lot of filler aided in no small part by the presence of Statham. But “The Transporter Refueled” feels even more bulked up and bland, Hamburger Helper Helper, a diminishing-returns re-launch of a franchise that didn’t really need, or deserve, to be towed back onto the silver screen.