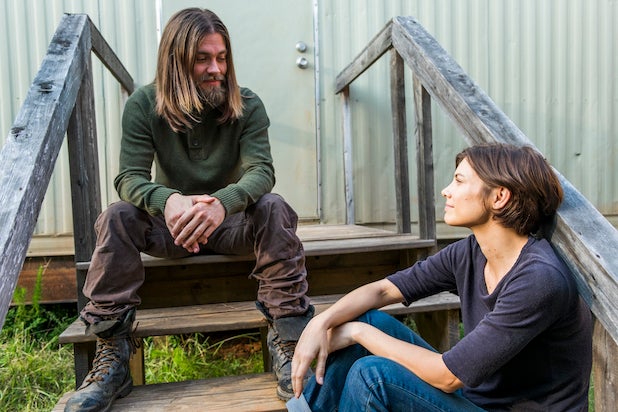 When Tom Payne stepped into the role of Jesus on AMC’s “The Walking Dead,” he probably didn’t realize that fans would continually come up to him to warn him of imminent death.

“That’s what I’m getting used to now, is people coming up to me and saying, ‘well you know you’re going to die now,'” Payne told The Wrap in a recent interview.

Payne, 35, said he usually replies: “Oh OK, interesting, I’ll let you know how that turns out.”

As his character’s name might suggest, Jesus acts as a moral compass in the wild world of the zombie apocalypse, where one can’t be bothered by the traditional constraints of ethics. A common refrain between Rick Grimes (Andrew Lincoln) and company has been kill or be killed.

But as we know from (sometimes painful) experience, the moral compasses of the show hardly last: we’ve said goodbye to Dale (Jeffrey DeMunn), Hershel (Scott Wilson), Beth (Emily Kinney), Glenn (Steven Yeun), and Sasha (Sonequa Martin-Green). And with Carl (Chandler Riggs)’s final words, it’s easy to make a case that he acted as a moral compass for Rick and Michonne (Danai Gurira) in his last moments, too.

“What I enjoy about the show is it makes a decision to show you what would, on the face of it, [be] the morally right decision. I’m happy to take that on because I personally would agree with that way of doing things,” Payne told TheWrap.

Also Read: 'Walking Dead': Why Carl's Death May Be the Most Important Death in the Show's History (Commentary)

Payne used Maggie (Lauren Cohan) and Negan (Jeffrey Dean Morgan) as an example: “How is it any different that she just randomly kills someone and Negan came in and randomly killed people? Like on the face of it, how is that any different?” He said that on a moral standpoint, Jesus can see both sides of the coin: that Negan believes he is doing what’s right as much as Maggie believes she is doing what’s right.

“We’re all on the same playing field and everyone makes decisions based on their own moral compass, but [decisions are] also colored by whatever has happened to you before,” Payne said. When Maggie executes one of the Saviors, it’s not surprising because she already watched Negan brutally murder her husband (and fan-favorite character) Glenn. When a Hilltop member gets killed on the road, it puts her over the edge. Jesus would have her to keep all of the Saviors hostage — and alive.

“Maggie struggles because she saw Glenn brutally beaten to death in front of her, she knows the right [thing to do], but she obviously feels huge amounts of anger, and she is struggling with that,” Payne said. “And Jesus is appealing to that side of her nature, but he understands absolutely where she’s coming from … I think he supports that if that’s what she felt like she needed to do, and that was the right thing like to assert herself and make sure that there was no uprising or anything.”

Still, though, Jesus “wants her to make what he thinks is the morally correct decision.”

He added that because Jesus has spent a lot of time “on the outside of groups,” he’s gotten very good at analyzing people. Remember when we were first introduced to Jesus on the show, back in Season 6? He could have just killed Rick and Daryl (Norman Reedus), but he sized them up before ever approaching them and knew they wouldn’t shoot him.

“He could have played that whole situation completely differently and just killed them, and stolen the truck on his own,” Payne said. “But he knew he’d sized up the situation and figured it out and figured out the best way to approach it.”

Also Read: 'The Walking Dead': Steven Ogg Tells Us About Chlamydia and Koalas While He Was at Walker Stalker Con

But things began to change for Jesus when Maggie, Sasha and Enid (Katelyn Nacon) joined the Hilltop.

“He’s not been that close with that many people in this world, and it’s only very recently that he decided that he was going to get more involved with Maggie and Sasha and Enid coming to the Hilltop. He got involved in more of a family dynamic so he started to risk things because he started to care a bit more,” Payne said.

So when it comes to the ethical dilemma of what to do with their Savior hostages, Jesus is facing “a slightly more risky” situation “because it involves a lot of other people and not just him.”

“But at the end of the day if it all goes wrong, then he’ll stand by Maggie killing them all, I think. He’s down for whatever she decides. But he’s gonna try out whatever he thinks is the best way forward first,” Payne adds.

Star sits down for interview and photo shoot