Aereo — which has drawn the legal ire of networks for providing their content via tiny antennas — has been painted as a potential killer of the television and cable industries.

But the way Chet Kanojia, the founder and CEO of the company sees it, Aereo doesn’t pose much of a threat to those industries — because they’re providing enough of a threat to themselves if they don’t adapt to the changing habits of consumers.

Kanojia appeared at TheGrill, TheWrap’s fourth annual Media Leadership Conference in Beverly Hills on Monday, for a panel moderated by the site’s editor-in-chief Sharon Waxman. Discussing the genesis  and purpose of Aereo, Kanojia described a world where fewer people — including young people — are paying for cable, and where loyalty to individual networks and shows is eroding. 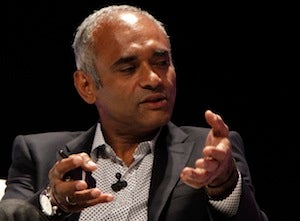 Aereo, already in a handful of cities, including New York and Boston, allows consumers to bypass cable by hooking up to the company’s network of mini-antennae to receive, free, basic broadcast television. Dragged into court by ABC, NBC, CBS and Fox, it so far appears to be prevailing

Kanojia discussed appearing at college presentations and asking the young people in attendance how many of them have cable — and seeing no hands going up.

He also opined that anyone who thinks viewers are excited about waiting to see their favorite programs at a particular time on a particular night, interrupted by commercials, is “delusional.”

As for the networks’ arguments that Aereo could erode revenue and lead to the disappearance of shows, Kanojia dismissed the notion. His company is simply leasing antennae to subscribers for use on internet-enabled devices — and that consumers have had access to antennae “since broadcasting began.”

“This is the same sort of argument that was used when cable started; in fact, there were commercials: ‘Don’t let that evil pay TV into your household,'” he recalled.

Kanojia did acknowledge that cable will have to adjust its current packaging, which he criticized as “inefficient,” but noted, “I think quality will always survive.”

The legal wrath of networks isn’t the only menace Aereo has been facing lately — there’s also the slings and arrows from his peers. Kanojia’s appearance came just a day after  Alki David, the owner of FilmOn — which offers a similar service to Aereo, and has pitted itself against as a foe of the company (FilmOn was initially called AereoKiller) — pitched a twit-fit in Kanojia’s direction.

“@ckanojia – hey fuckhead, if you keep ddosing FilmOn you are going to pay in more ways than you can imagine,” one missive read, according to website The Verge.

“What you are doing is like breaking into  someone’s home and smashing their shit up,” David continued. “Fortunately [you] lame fuck, my geeks are smarter.”

(David later told The Verge that he suspected Aereo of launching a weeks-long Denial of Service attack against FilmOn’s site,)

Kanojia acknowledged the tense relationship between the two companies but declined to analyze whey David is so angry, saying he’d prefer to concentrate on growing Aereo.

He also denied Waxman’s repeated requests to reveal how many subscribers Aereo presently has.Though he did admit: “We don’t disclose that. According to (CBS President and CEO) Les Moonves we have 2,000 subscribers, so that’s my official answer.”