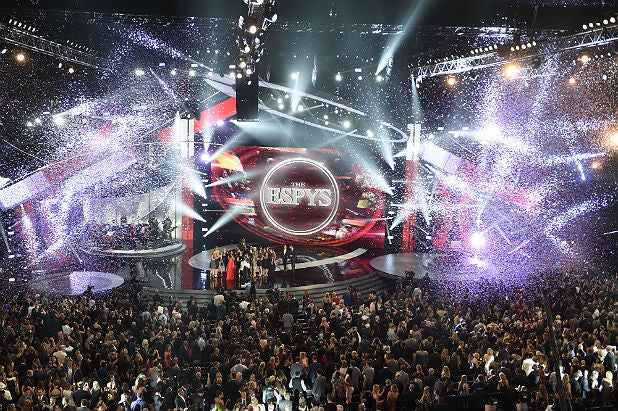 The 2015 ESPYS welcomed the biggest names in sports at the newly named Microsoft Theater (formerly Nokia) in downtown Los Angeles on Wednesday night.

There was much to see on TV including a masterful hosting performance by “Community” star Joel McHale, a historic speech by Caitlyn Jenner as she accepted the Arthur Ashe Courage Award, and lots of laughs, skits and even some kissing along the way.

But there were also plenty of moments you could only see with red carpet access and a seat inside the theater. Fortunately, TheWrap had both.

Also Read: Caitlyn Jenner Fights Back Tears at ESPY Awards: 'It's Not About Me. It's About All of Us Accepting One Another' (Video)

Here are 7 things you didn’t see on TV:

1. Caitlyn Jenner captivates the audience
Caitlyn Jenner had the packed house in a hushed silence when she took to the stage to accept the Arthur Ashe Courage Award. That soon broke into applause, a standing ovation, laughter, more standing ovations and a theater full of respect. Clearly everyone had been waiting for her to make the historical speech, as when Jenner left the stage half the crowd rushed out for a bathroom or bar break. It was such a mass exodus that the announcer had to remind everyone that they had more awards to present.

2. Kendall and Kylie Jenner make a statement on the red carpet
While Caitlyn Jenner was the talk of the night long before she took to the stage to receive the Arthur Ashe Courage Award, her daughters caught the eye of everyone on the red carpet. With Kendall Jenner in sophisticated black and sister Kylie in glittering gold, the sisters perfectly looked the part for the role of supportive family.

3. Sports hottest couple heat up the night
Russell Wilson and Ciara declared last week that they haven’t consummated their relationship yet, which made it even more sweet when they got caught on the Kiss Cam in the first commercial break, sharing a sexy smooch. Far less romantic was Brett Favre and his wife, who gave him a peck on the cheek.

4. Rob Gronkowski wins an ESPY — and the best dancer award
The ESPYS Dance Cam was dominated by New England Patriots star player Rob Gronkowski showing off his infamous dance moves with brothers Gordie Jr., Dan and Chris. The famous party family got an even bigger shout out later in the night when McHale showed a trailer for their upcoming Gronk Party Ship. The Super Bowl champion lived up to the hype by winning Comeback Player of the Year — and doing a celebratory jump and shoulder bump with his brothers. Despite being a Seattle Seahawks fan, McHale even closed the show by thanking “everyone for coming, and Rob Gronkowski.”

5. Alex Rodriguez and Derek Jeter shake hands
A New York Yankees peace pact hatched after the ESPYS when former teammates Derek Jeter, who was honored with the Icon Award, and Derek Jeter — who was the butt of an “apology” joke before losing out on the Comeback of the Year to Gronk — shook hands.

6. Green Bay Packer icons share quarterback tips
Two legendary Green Bay Packers quarterbacks were reunited when Brett Favre and Aaron Rodgers walked the red carpet together. The retired legend was later spotted giving the current QB throwing lessons — not that the former Super Bowl champion needed it. Favre was later joined on stage by Vince Vaughn, who he trash-talked for being a Chicago Bears fan as the pair presented the award for best team to the US Women’s soccer team.

7. Devon Still and his cancer-stricken daughter spark tears … and light up social media
LeBron James prompted tears and yet another standing ovation when he anointed the Jimmy V Foundation Award to Cincinnati Bengals player Devon Still and his daughter Leah, whose battle with cancer touched the hearts of the whole NFL last season. After the most heartfelt speech a father could give, Still even got a laugh when he told his fiancée he’d give her “the wedding of her dreams” — as long as she didn’t have any “crazy dreams.” While the audience was overcome with emotion, social media was quickly flooded with support for Devon and Leah.