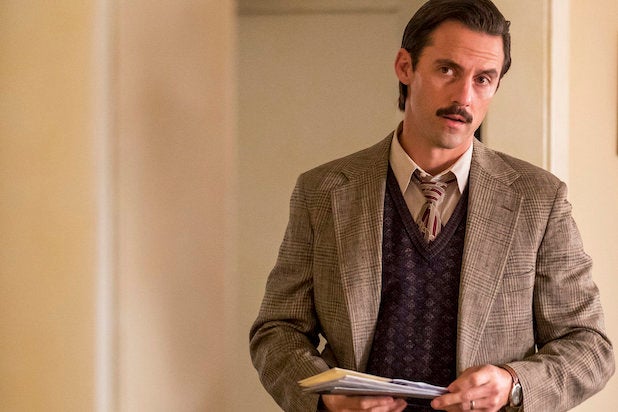 (Warning: This post contains spoilers for Tuesday’s episode of “This Is Us,” titled “Songbird Road: Part One”)

Last week, “This Is Us” fans found out Jack Pearson (Milo Ventimiglia) — America’s favorite dad and the world’s perfect husband — definitely lied to his family about the fact his little brother Nicky (played in the present day by Griffin Dunne and in the past timeline by Michael Angarano) did not die in Vietnam. And tonight, Kevin (Justin Hartley), Randall (Sterling K. Brown), and Kate (Chrissy Metz) go to find out why.

First off, Tuesday’s episode, titled “Songbird Road: Part One,” revealed what happened when viewers heard that off-screen explosion at the end of the midseason finale last November.

It turns out Nicky was “fishing” with a little Vietnamese boy by throwing grenades over the side of a small rowboat and when one landed inside the boat rather than in the water, Jack’s little brother was unable to get the child out in time — but did dive out to save himself. The little boy died and Nicky was sent home from the war, catatonic, before he could tell Jack it was an accident.

Also Read: 'This Is Us' EPs on Big Three's Introduction to Nicky, Rebecca's Reaction to Jack's 'Pretty Major Lie'

Jack was unable to forgive Nicky for this moment and ignored his postcards — addressed from Clark Kent — for years, until one day when the Big Three were preteens, he drove to meet him in his trailer just a few hundred miles away in Bedford, Pennsylvania. Jack had a short, awkward chat with his little brother before telling Nicky he could no longer contact him, as he had a family now and wanted to move on. He then left, and though he briefly considered turning back, he ultimately chose to shut his brother out from that day forward.

And it isn’t until Kevin uncovered one of these postcards at the end of last week’s episode and revealed it to his siblings and mother, Rebecca (Mandy Moore), at the top of tonight’s installment, that the Big Three go to find Nicky and look into why their dad hid him from them.

Though Jack seemed to think that was the right thing for him to do, Ventimiglia doesn’t.

Also Read: 'This Is Us': Sterling K Brown Says You'll Know Why They Are Going to See 'Her' By the End of Season 3

“I personally didn’t agree with it,” Ventimiglia told TheWrap. “I didn’t agree with Jack’s decision to cut his brother out. I imagine Jack needed time to get over it, but I think Jack was moving forward in his life. And what will be interesting to me is Jack’s life once he gets home [from the war]. ‘Cause, I mean, he enlisted in Vietnam to go find his brother, he finds his brother in the middle of a war — he finds his brother, tries to help his brother, and then his brother contributes to the unspeakable. So it’s interesting to me, Jack’s decision beyond wartime. Because there was a lot that was said during the context of tonight’s episode that you can understand why Jack would want to distance himself from his brother, but I think time has a chance to heal things and you never forget, but hopefully you get some forgiveness in your life.”

When Jack returns home, he lies to Rebecca about just having been to see a friend from the war — not revealing it was Nicky. Ventimiglia says “it’s safe to assume that was the last of it for Jack and Rebecca” and she’s definitely going to be just as shocked as the Big Three while learning about Nicky going forward.

“Jack definitely operates in black and white,” Ventimiglia said. “And I think moving forward — I mean last season Jack was with Miguel and Kevin at the mall and they were bellyaching about women and he said, ‘Just move on. Don’t dwell in the pain or the past and just move forward.’ And this is one of those moments where Jack did that. And I’m sure what Rebecca had learned of being with her husband was she wasn’t going to push it. If he wanted to talk about it, he would talk about it. And he obviously didn’t want to talk about it or he talked about it enough to where that’s all the were going to converse about.”

Also Read: 'This Is Us': Sterling K Brown on What That Election Result Means for Randall and Beth - And Future Randall and Future Beth

But it looks like everyone is going to be talking about it now, something Ventimiglia says he’s not sure would have happened if his character was still alive in the present day.

“I wonder if they would have even known if Nicky were alive had Jack not passed away in his 50s, you know?” Ventimiglia wondered. “Or if time goes on and especially in the day and age of 23andMe and Ancestry.com if one of them would have found out that they did have an uncle and then it becomes a big family thing. I hear about that a lot these days, people discovering they’ve got relatives they didn’t know about and it really impacts them and blows them away and they ask all these questions of their parents and it’s like, ‘You know what? How about we try to just accept that life is maybe not as we saw it and try to give a little understanding to what people may have not spoken about for years.'”

As for whether or not Jack would have forgiven Nicky for the dark moment in Vietnam had he listened to his side of the story about the accident, Ventimiglia isn’t sure.

“I don’t know that he would have,” the actor said. “I don’t know. I mean, accident or not, it was careless and it cost a life of a young boy and that’s sad. That’s very, very sad. And like I said, you can forgive someone their mistakes but also you’re never going to forget it. I don’t see Jack ever really forgetting what his brother was responsible for. Especially because of his brother’s choice to do drugs and use, that led to the death of an innocent boy. I think that’s where Jack’s black and white comes in. I think that’s where Jack is not letting his brother off the hook.”

You can read our interview with “This Is Us” co-showrunners Isaac Aptaker and Elizabeth Berger about tonight’s episode — and the next half of the two-parter — here.