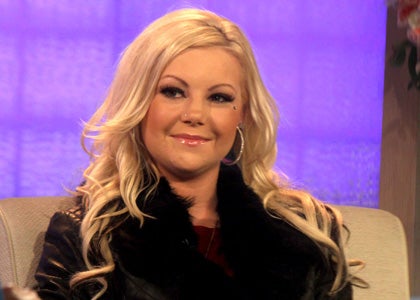 Just when you think there can’t possibly be another blond cocktail waitress/porn actress out there who had a fling with Tiger Woods, one emerges from the tall grass, press release in hand.

Likewise, just when this scandal saga seems to have exhausted all plot twists, it evolves to another narrative plane entirely.

The latest bombshell in the blitz of Tiger tales is a claim that Las Vegas “model” Jaime Jungers took cellphone pictures of Woods nude during their purported two-year thang.
The RadarOnline report quotes Jungers’ aunt, Susan Minor, as saying Jamie took the pictures as insurance against getting dumped. (In a less refined era, this kind of insurance was called extortion.)
What’s gruesomely funny is that apparently Jungers’ mother and the chatty aunt encouraged Jamie to cash in her “policy.”
The news comes on the heels of Playgirl’s decision not to put on its website purported nude images of Woods, and last week’s injunction granted by a London High Court judge barring anyone from publishing Tiger’s naked images in the U.K.
The interesting thing here is that Woods’ British lawyers claimed that nude photos of their client did not exist — but if they did, they are doctored photos.
Yet this just-in-case denial suggests another possibility: Tiger may not remember such pictures being taken, but that doesn’t mean they weren’t taken. (Call him reckless, but Woods would have to have been a lunatic to pose for them.) Now, apparently, what happened in Vegas isn’t content to stay there.
According to RadarOnline, Minor said Jungers took the pictures of Woods while he was passed out drunk in a hotel — leading Woods, we’re sure, to do some quick math involving how many times he may have fallen asleep in bed with how many women who owned cellphone cameras.
Jack Lerner, a law professor at USC and director of its Intellectual Property Clinic, tells TheWrap that if Jungers took the photos in California (it’s not completely clear where they were taken), Woods might have a chance to quash their publication in court.
“Many states have privacy protections,” says Lerner, “that [guard against] what’s generally called ‘intrusion upon seclusion.’ These laws protect things like phone wiretapping and the use of high-powered binoculars to look into homes. California has one of the strongest versions of this kind of law, and it might also cover nude photos that are taken without permission in a private setting.”
That may be good news for Woods as far as California is concerned, but if Tiger’s scandal shows us anything, it’s that the kind of women he is so fatefully attracted to are themselves are irresistibly drawn to the spotlight of publicity and are capable of doing nearly anything to stand in its merciless glow.
x
Looks like you're enjoying reading