A former TMZ producer has filed a lawsuit against the site, claiming he was fired for complaining about alcohol and drug use by other staffers on the job after he returned from a medical leave for depression.

According to the suit, filed by Christian Shostle in Los Angeles Superior Court on Tuesday, his co-workers "were using illegal drugs on the job, which was aggravating his stress condition and making his work environment harmful."

“[TMZ] did nothing to stop the illegal drug use," according to the claim.

Shostle claims that two days after returning to work – in April 2009 – he told his bosses about his colleagues’ on-the-job drug use. Less than a month later, on May 5, he claimed two of his bosses — Stuart Alpert and Charles Latibeaudiere — told him he "was not performing up to par." 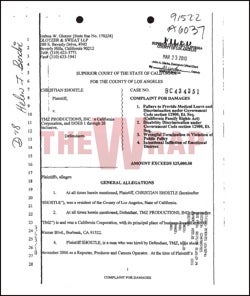 Two days later, he claims, he complained to another supervisor, Diana Dasrath, “about the illicit use of drugs at work by his co-workers” and warned he “may need further medical leave" because of it.

Shostle is seeking punitive damages for lost past and future earnings, medical expenses and suffering.

TMZ managing editor Harvey Levin and a Warner Bros. representative did not immediately return requests for comment. Shostle was not available for comment.

A person at the law firm representing Shostle — Glotzer & Sweat — declined to comment.

UPDATE: From a TMZ spokesperson: "We are not commenting as Warner Bros. typically does not comment on ongoing litigation."