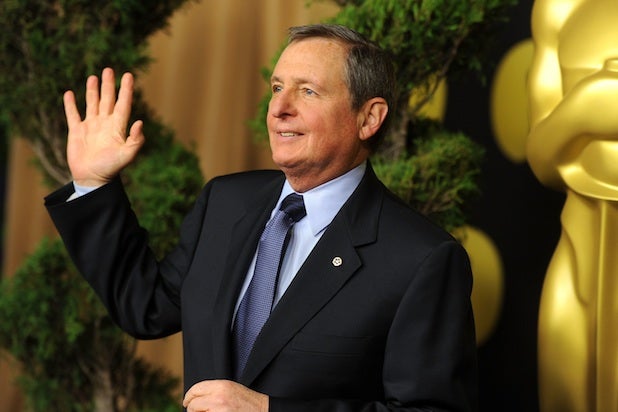 Tom Sherak was remembered as a consummate entertainer, humanitarian and rabid Dodgers fan during an emotional tribute Wednesday night at the exhibition trade show, CinemaCon.

The former president of the Academy of Motion Picture Arts and Sciences and longtime studio executive was honored posthumously with the 2014 Pioneer of the Year award by the the Will Rogers Motion Picture Pioneer Foundation, in an event expected to raise roughly $1 million for charity.

It was an evening filled with reflections from Sherak’s friends and colleagues such as DreamWorks Animation chief Jeffrey Katzenberg and 20th Century Fox distribution head Chris Aronson, as well as an emotional performance by the Tenors and video tributes from Adam Sandler and Dodgers announcer Vin Scully.

“He felt that all of us were lucky to be working in the business, and he was the luckiest of us all,” Katzenberg said, remembering Sherak’s pep talks when one of his films would flop at the box office, as well as his constant entreaties to help out with various charitable causes.

Also read: Cassian Elwes Remembers Tom Sherak: ‘I Will Never Forget His Kindness to Me as a Young Man’ (Guest Blog)

Sherak died last January of prostate cancer at the age of 68. He was hailed for his many kindnesses during the evening of testimonials. Colleagues joked and shared stories about his habit of helping get people appointments with top medical specialists, his work on behalf of multiple sclerosis, even his championship of a down on his luck dog breeder he rescued from financial ruin.

In his video appreciation, Sandler joked that in heaven, Sherak “is making Moses reconsider how he talks to people.”

He was a Brooklyn boy who never forgot his roots, friends said. One of the evening’s high points included a video retrospective of his years growing up in the outer boroughs, with childhood friends recollecting on his time in Hebrew school, his skill making egg creams at a local diner and his army service.

The industry’s icon’s family and wife of 46 years, Madeleine, were on hand to accept his honor.

“You energized him to live his life to the fullest,” Madeleine Sherak told the crowd while accepting her husband’s award.