Sorry, Rachel Maddow: Sean Hannity is No. 1 in cable news again, making 2018 the second year in a row the face of Fox News Channel can make that claim.

Under the “Hannity” host is the “Maddow” host, with Fox News’ Tucker Carlson earning bronze in terms of overall audience averages. Fox also owned the next three slots, with Laura Ingraham’s series, “The Five,” and “Special Report With Bret Baier” staking their claims.

MSNBC’s Lawrence O’Donnell is seventh and Chris Hayes came in ninth. Fox shows “The Story” and “America’s Newsroom” bookended Hayes’ “All In,” making that the Top 10 of 2018.

Below are the Top 35 shows across all of cable news. A lengthier ranker would include Fox Business Network, CNBC and HLN — which first appear with the 46th, 47th and 50th-ranked shows of the year, respectively — but they simply don’t make the cut in our abbreviated version. Hell, even CNN only nabs six of the Top 35 spots.

Our readers can focus on the P2+ AA (000) column, which tallies all viewers over age 2. They’re written in thousands, which means one can read the “Hannity” line as each episode averaging 3.275 million total viewers. At the bottom of the list is Wolf Blitzer’s “Situation Room” on CNN, which drew 923,000 viewers per night.

Due to the nature of the news cycle and news-programming viewing, we did not include delayed viewing in this story. 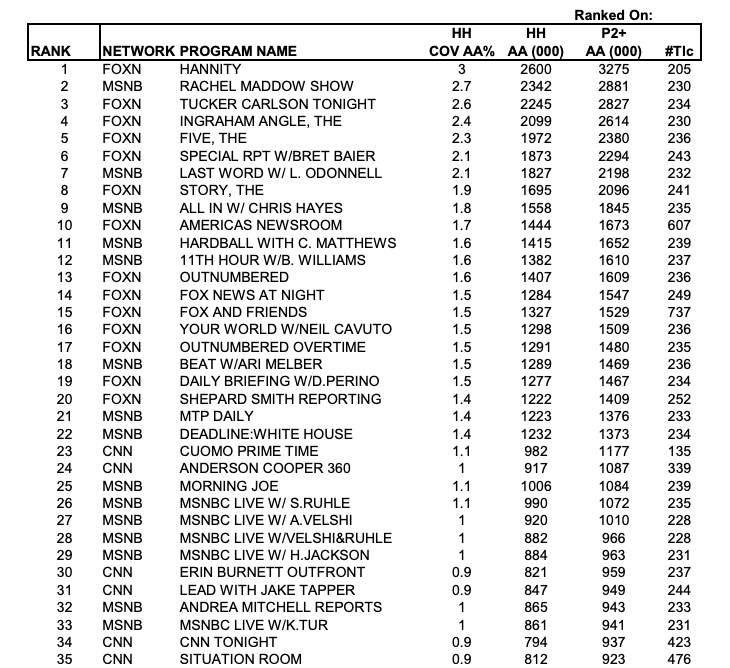