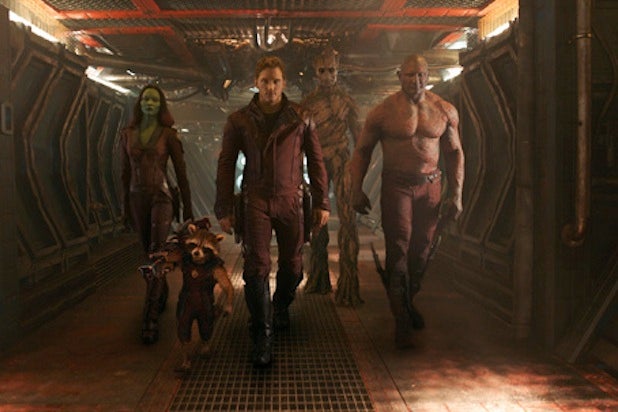 What a difference a year makes.

CinemaCon, the annual exhibition industry trade show unfolding this week in Las Vegas, dawns as theater owners are basking in the glow of unexpected box office hits such as “The Lego Movie” and “Ride Along.” These films and others have helped push domestic ticket sales to over $2 billion, an 8 percent jump from the previous year, and there is a great feeling of optimism that upcoming releases such as “Divergent” and “Captain America: The Winter Soldier” will continue to keep seats filled.

In contrast, last year’s CinemaCon landed with a box office mired in one of its worst slumps in recent memory. The setting in Caesars Palace brought to mind the flickering end of a certain ancient empire instead of the Pax Romana.

“The state of the business is strong right now and our members have confidence in what’s going on,” said John Fithian, president and CEO of the National Association of Theatre Owners, an exhibition trade group. “Last year we had a dearth of diverse movies at this time, but this spring there’s been more for different demographics and ethnicities and that’s driving the market.”

But exhibitors’ memories are short and their eyes are usually fixed on the horizon. The more than 5,000 theater owners, studio executives and vendors are flocking to Sin City to get a preview of the films they hope can help the 2014 box office eclipse last year’s record-setting numbers.

“This year’s convention is going to offer more of everything for everyone than ever before,” Mitch Neuhauser, the convention’s managing director, told TheWrap.

To that end, seven studios — a list that includes Disney, Lionsgate, Warner Bros., Fox, Paramount, Sony and Universal — will present the best of their summer and holiday slates. If history is any guide, it will be a barrage of film clips and appearances by stars of blockbuster hopefuls such as “Transformers: Age of Extinction,” “X-Men: Days of Future Past,” “The Amazing Spider-Man 2,” “Guardians of the Galaxy” and “Interstellar.” A few studios will screen upcoming releases in their entirety, as Universal and Lionsgate plan to do with their upcoming comedies “Neighbors” and “Draft Days.”

Sometimes these teases can result in a groundswell of support for under-the-radar titles, as was the case last year with Fox’s “The Heat,” starring Melissa McCarthy and Sandra Bullock, and the previous show with Universal’s “Ted,” Seth MacFarlane‘s R-rated comedy starring Mark Wahlberg. Other times, they add to a drumbeat of bad buzz for a picture (even in preview form, most exhibitors had a sinking feeling about “After Earth” and “RIPD”).

Prior to the internet, these presentations were essential for theater owners who were trying to determine what movies they would book over the coming months. Nowadays most exhibitors have already decided which films they plan to show over the remaining nine months of the year. They may change the number of screens they allot to a particular picture based on the reaction among their fellow theater owners, but aside from a few alterations at the edges, these figures won’t be dramatically overhauled.

Instead, Fithian argues the value is in getting exhibitors fired up about a particular film.

“It helps make cinema owners aware of the themes of certain films which translates into grass roots marketing,” he said. “It’s everything from how they get their attendants to talk about a certain picture to where they place their in-theater displays and standees.”

There’s also an increased emphasis on new technology. Major theater chains are at the end of an exhibition overhaul that has seen them convert from film to digital projectors. That shift has led to a greater adoption of big screen offerings such as 3D and faster rates of projecting. It’s a speed of change that Fithian predicts will only accelerate. This year’s CinemaCon will offer up demonstrations and discussions about exhibition enhancements in various stages of development such as laser projection, higher-frame rates and immersive audio systems.

“The industry essentially relied on the same technology for 100 years, but in the last few years all that changed,” Fithian said.

The other great benefit for those navigating the baccarat tables and roulette wheels at Caesar’s is the opportunity to network at the world’s largest gathering of theater owners.

“Many years deals will take place there or ones will happen soon after,” Joel Cohen, CEO of the online ticketing hub, MovieTickets.com, said. “Sometimes you just have positive conversations that lead to deals happening in the future. It’s worth going to touch base with folks.”