Back in 2000, I moved to Italy with my family to write a murder mystery set in Florence. We rented a 14th century villa on a hill just outside the city, looking out over a lovely olive grove.

I soon discovered the grove had been the site of one of the most horrifying double-murders in modern Italian history, committed by a serial killer known as the Monster of Florence. The Monster killed young couples making love in the Tuscan hills, mutilating the female victims and taking away their sex organs. He was never caught. 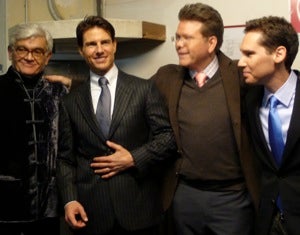 In the olive grove outside our house, however, the Monster made a mistake. He killed a gay couple making love, in which one of the partners was young and slender with long blond hair. When he discovered his error he was furious, trashing the site and ripping up a gay magazine he’d found.

I never wrote the novel. Instead, I teamed up with Mario Spezi, the local newspaper reporter who had covered the Monster’s killings, and together we wrote a book about it, called “The Monster of Florence.”

The book was published last June. Movie rights to the story were picked up by United Artists, with Christopher McQuarrie, Tom Cruise and Jinks/Cohen producing. (See photo above, with — from left — Spezi, Cruise, McQuarrie and director Bryan Singer backstage at the Rome premiere of Singer’s “Valkyrie.”)

Our investigation of the Monster case went against the official police theory of the killings. The investigators did not like our conclusions or the fact that we publicly disagreed with them. They summoned me to an interrogation, accused me of perjury, obstruction of justice, and being an accessory to murder, and suggested I leave the country. (I left the next day.)

They arrested Mario Spezi and accused him — this is not a joke — of being the Monster of Florence himself. He was thrown into an isolation cell in Capanne Prison outside Perugia.

The powerful state prosecutor behind all this was a man named Giuliano Mignini, Public Minister of Perugia, who headed a branch of the Monster investigation.

Spezi’s arrest generated an international uproar, led by the Committee to Protect Journalists and other freedom of press organizations. He was released after 23 brutal days in prison; Mignini was then indicted for abuse of office. And yet, in Italy, an indicted prosecutor is not automatically removed from office. Mignini remained (and remains) in power.

The announcement of the movie deal was far bigger news in Italy than it was in the U.S. Italians were thrilled that Hollywood might make a film about the country’s most famous serial killer. The name Tom Cruise is pure magic in Italy, and Italians adore “The Usual Suspects,” the movie that won McQuarrie an Oscar, considering it one of the greatest films ever made.

The news, however, was not pleasing to Giuliano Mignini. He plays a prominent role in our book and it is not a good one. His displeasure must have deepened when he was asked by reporters who he thought should play himself in the movie.

And so, it seems, Mignini reacted. Around the same time one of Italy’s biggest newspapers devoted a spread to the news of the film, Mignini struck back.

He filed a round of new charges against Mario. These include murder (yet again), “vilification” (of Mignini) and disturbing the public order by means of the press. In a court filing Mignini also wrote that I was “undoubtably involved” in the same murder cover-up and conspiracy and he told several reporters that he would have me arrested if I returned to the country.

While I am safe in America, Mario is not. Mignini’s persecution has now brought him to the brink of ruin. Despite a long and honorable career as a journalist, he can’t find freelance work now because newspapers are afraid to hire a journalist charged with murder. He came down with from a life-threatening pulmonary infection which his doctors think is partly due to an immune system compromised by stress. The legal costs have devastated him economically and he is close to losing his home.

He lives in constant fear of arrest. Using the full power of the state, Mignini is slowly crushing Mario to death, professionally, economically — and literally.

Saturday night, April 11, CBS’ “48 Hours” will air an hour-long segment on the Amanda Knox murder trial, in which Giuliano Mignini is also the chief prosecutor. The show tells a truly horrifying story of how Mignini and the police have railroaded a charge of murder against a 20-year-old American exchange student, claiming she cut her roommate’s throat in a Satanic rite or sex game.

This is not your usual network television. Be sure to tune in.

Douglas Preston is a best-selling author; his latest book is "The Monster of Florence," about Italy's answer to Jack the Ripper, written with Mario Spezi.

Douglas Preston is a best-selling author; his latest book is "The Monster of Florence," about Italy's answer to Jack the Ripper, written with Mario Spezi.