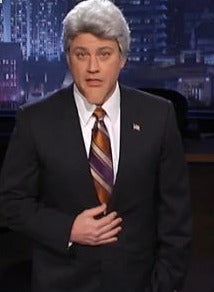 This could be awkward.

Just a day after doing a savage parody of Jay Leno — complete with a gargantuan faux chin — on the opening of his ABC talk show, Jimmy Kimmel will be appearing via satellite for an interview on "The Jay Leno Show" on Thursday.

Kimmel will follow in the footsteps of Michelle Obama and Taylor Swift by appearing on Leno’s regular “Ten @ Ten” segment, which regularly features celebrities or newsmakers from wherever they are around the world.

Kimmel will sign on from the Hollywood set of "Jimmy Kimmel Live!"

During his impersonation on Tuesday’s night, Kimmel fired off a series of lame jokes as Leno and portrayed the NBC fixture as a relentless late night expansionist hell bent on taking over every time slot — including Kimmel’s own.

Maybe a stint on Leno’s ratings-challenged 10 p.m. show is Kimmel’s form of a peace gesture.

In any case, it wouldn’t be the first: Kimmel, an unapologetic fan of David Letterman, has personally feuded with Leno in the past; it was a well-known fact in Hollywood that they didn’t get along. Though the two had apparently forged a truce of sorts, you’d hardly know it from Tuesday night’s send-up.