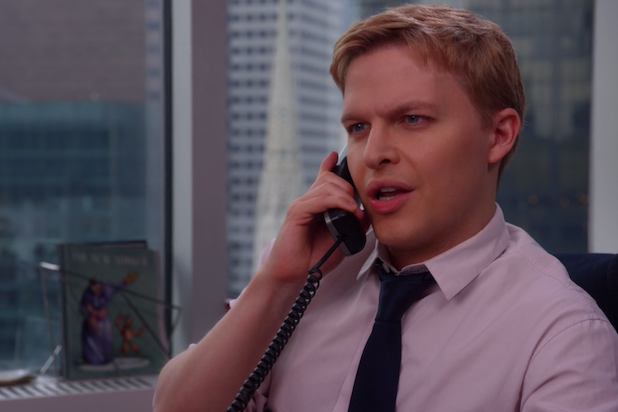 Journalist Ronan Farrow has helped take down powerful Hollywood and media moguls like Harvey Weinstein, Les Moonves and Eric Schneiderman. And in the final six episodes of Netflix’s “Unbreakable Kimmy Schmidt” he adds the puppet Mr. Frumpus to the list of men whose sexual abuse accusations he’s unearthed. You know, fictionally speaking.

Farrow makes a surprise cameo as himself in Season 4B of the comedy, which dropped Friday, when the famous reporter calls up Kimmy’s (Ellie Kemper) best friend Titus (Tituss Burgess) in Episode 408 (titled “Kimmy Is in a Love Square!”) to ask him to come forward with his story about being harassed by the orange puppet while trying to land a part on “Sesame Street.”

Eventually Farrow is able to convince Titus to head over to the New Yorker offices to go on the record — getting an, “Oh, my God! You are beautiful. Puppets must be constantly hitting on you!” from the aspiring actor in the process — and that’s about all we see of the journalist on the show’s special #MeToo-centric episode.

Kemper told TheWrap the cameo “worked perfectly” — though she has no idea how the Tina Fey-created series managed to land Farrow for the gig.

“My sense is that, I think he liked the show. (laughs),” she said. “And I think he did it pretty willingly. And obviously he’s a pretty busy man, so I think there was one window where we could get him.”

“And he was in the script, like at the table read, as Ronan Farrow,” she continued. “And I think that was subject to change based on availability and interest. But we read the table script a week before we get the shooting draft, so I guess in that week they confirmed him!”

Kemper said she “was sad because I didn’t get to meet him” — seeing as this was really Titus’ storyline and Kimmy was busy kinda dating her boyfriend’s parents in that episode (long story) — “but I thought he was such a good sport for doing that.”