TheWrap magazine: And what took so damn long to get here

A version of this story about “Untold” first appeared in the Documentaries issue of TheWrap magazine.

There is no shortage of excellent documentary films being made these days, with some of the very best stuff coming out of the sports genre. The current standout in the space may be Netflix’s “Untold,” a series of five sports documentaries from brothers Chapman Way and Maclain Way, who previously directed the very sportsy “Battered Bastards of Baseball” and the very non-sportsy “Wild Wild Country” together.

“Untold,” which was recently renewed by Netflix for a second season (or “Volume 2”), positions itself as bringing “fresh eyes to epic tales from the wide world of sports.” Those new perspectives are a key component to making this the golden age of sports documentaries, according to Maclain Way. “In this last four or five years, you’ve seen really good documentary filmmakers not be afraid to go into a world (where) they don’t know the most out of everyone around them,” he said. “But they take their own skill set and their own tool set and they make something compelling.”

For the Way brothers, 2014’s “Battered Bastards,” which was lauded and sold (also to Netflix) at Sundance, hit close to home: The subject of the film, minor-league baseball team the Portland Mavericks, was owned by their grandfather, Bing Russell, while their uncle, the actor Kurt Russell, once played for the now-defunct squad. In general, though, “the Venn diagram of independent filmmaking and sports is not super overlaying,” Maclain Way said. 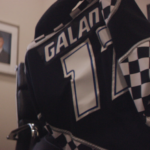 That began to change with ESPN’s series “30 for 30,” which invited traditional filmmakers with an interest in a sporting event or persona — and not always a known commodity — into the space. The floodgates only opened wider with the prominence of streaming services on the prowl for library content. And what makes Netflix the king of all in this space? “Netflix doesn’t have a deal with sports leagues,” Chapman Way said. In other words, there is no conflict of interest that might water down storylines.

While more independent filmmakers have been lacing up their cleats and rising from the bench lately, Maclain said it still takes coaxing — or coaching, in sports parlance. “In talking to filmmakers, I usually have to at some point give the pitch where it’s like: ‘Don’t worry that you don’t know anything about this sport,’” he said of his usual pep talk to directors. (For “Untold” Volume 1, Maclain and Chapman directed documentaries on minor-league hockey team the Danbury Trashers and former tennis pro Mardy Fish; Floyd Russ, Laura Brownson, Crystal Moselle directed the other three installments.)

Those knowledge gaps can be filled by producers, Maclain said. And the lesson here is that artsy filmmakers can still be artsy filmmakers, even when a ball and a hoop are involved; the topic is always secondary to the arc. “Our conversations in the edit bay are so much more structured around three-act narrative and inciting incidences and music cues and pivoting the perspective,” Maclain said. “It’s way more grounded in a filmic way than it is in a sports language.”

In addition, Chapman Way said, no one is better equipped to serve as the narrator of their own unfiltered story than a top athlete. “There’s something interesting about athletes in that they’ve been raised to go after this very singular focus, which is to become a professional athlete. It usually starts when they’re 5, 6, 7 years old,” he said. “Most of these athletes, they really don’t care how you feel about them: if they’re a good person, if they’re a bad person. It’s kind of irrelevant to what they’ve been training to do, which is to be the best at one single thing in their life. So what I’ve found is when you have people in the interview chair that don’t care what you think about them, odds are that will always make for really insightful interviews.

“They’re not trying to see down the road of how every single thing is going to be interpreted, they just kind of speak from their heart. And if you don’t like it, that’s tough s— for you.”

Read more from the Documentaries issue of TheWrap magazine.