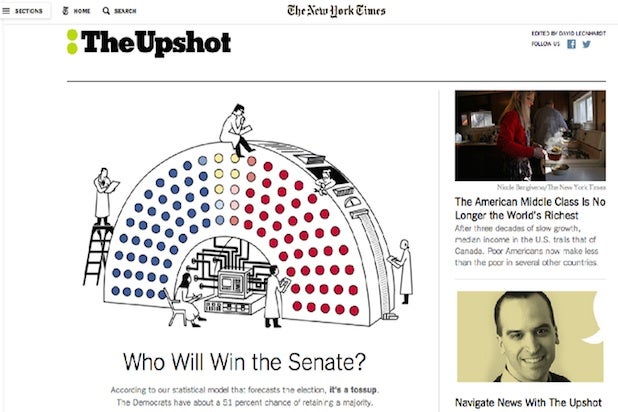 A new explainer blog is entering the crowded fray to compete with the other infographic upstarts.

The Upshot, a data-driven site from the New York Times, launched on Tuesday and vows to help readers crunch the numbers in many topical political and economic news stories.

Washington bureau chief David Leonhardt is spearheading the project, the Times’ first shot across the bow at replacing Nate Silver’s FiveThirtyEight blog, which was a big success during the 2012 presidential election before moving to ESPN. The Upshot will also compete against Ezra Klein’s flashcard-obsessed Vox.com, which debuted earlier this month.

“You have no shortage of excellent news sources,” Leonhardt said. “We believe many people don’t understand the news as well as they would like.”

The site will pull data from existing New York Times stories and present the information in various explainer articles.

“We will build on the excellent journalism The New York Times is already producing, by helping readers make connections among different stories and understand how those stories fit together,” Leonhardt wrote. “We will not hesitate to make analytical judgments about why something has happened and what is likely to happen in the future. We’ll tell you how we came to those judgments — and invite you to come to your own conclusions.”

FiveThirtyEight’s relaunch in March was pilloried by critics for being surprisingly lackluster in presenting data to its readers. Slate, for instance called out FiveThirtyEight’s Roger Pielke Jr. for his “faulty data, ideological bias, and poor statistical work.”

Only time will tell if The Upshot can keep pace with the other high-profile explainer sites, but for now policy-savvy readers will have a slew of choices to pick from.