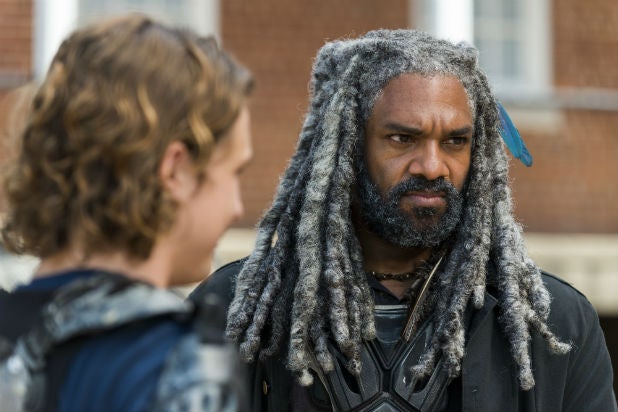 (Spoiler alert: Please do not keep reading if you have not seen this week’s episode of “The Walking Dead”)

In this week’s “The Walking Dead,” King Ezekiel is pushed further toward war with the Saviors, by both the enemy group themselves and those within The Kingdom.

The episode opens with Ezekiel (Khary Payton) and his inner circle from The Kingdom doing their regular meet up with the Saviors to deliver food.

However, one of the Saviors decides to pick a fight with Richard (Karl Makinen) and demands he surrender his gun. Richard and the Savior draw on each other, leading to a tense standoff. Ezekiel orders Richard to stand down.

But the Savior is not satisfied and moves to strike Richard, leading Morgan (Lennie James) to strike the Savior with his staff. When the Savior then moves against Morgan, Benjamin (Logan Miller) knocks him to the ground. The Savior leader orders his men to back off, but tells Ezekiel to watch his step.

Cooper Andrews, who plays Ezekiel’s faithful (and hilarious) steward Jerry, says that Ezekiel will do whatever he can to keep the peace.

“There is a peace right now,” Andrews told TheWrap. “I think it’s hard choice for [Ezekiel]. He doesn’t take it lightly, but peace is peace and that’s why he made his decision.”

Back at The Kingdom, Richard and Daryl (Norman Reedus) bond over their mutual hatred of the Saviors and their desire to fight them. Richard takes Daryl to a secret weapons cache in the woods and tells him he has a plan to push Ezekiel towards war.

They hike out to a nearby road. Richard explains he wants to ambush a Savior convoy, then leave a trail to a nearby cabin where someone Ezekiel cares about is living. Daryl grows suspicious and demands to know who the person is, and Richard eventually admits it is Carol.

He and Daryl fight, with Daryl beating Richard severely and telling him should anything happen to Carol, Daryl will kill him. According to Andrews, the plan was flawed because Ezekiel would not risk The Kingdom over Carol.

“For the king, it would take more than something personal,” he said. “It would take him thinking The Kingdom is being threatened, not just one person. It’s him seeing the community as a whole and what’s best for the community.”

But where does Andrews believe The Kingdom’s loyalties should lie?

“If Ezekiel says it’s a war, Jerry’s for it,” he said. “If he says no, he’s for it. I think he really likes Rick’s group but I also think part of why he’s so happy is he doesn’t have to make the hard calls. He’s going to support whatever Ezekiel’s calls are.”

Meanwhile, Rick (Andrew Lincoln) and the group are still being held captive by the mystery group from the end of the last episode. They take Rick and the others to their junkyard hideout, where Rick asks their leader (Pollyanna Mcintosh) to join the fight against the Saviors.

She refuses his offer, but Gabriel (Seth Gilliam) tells her that Rick can accomplish anything, and that her group will share in the spoils once the Saviors are defeated.

The leader agrees to speak further with Rick, and takes him to the top of a large junk pile overlooking the entire compound. She tells Rick her group is finding it harder to scavenge supplies, and they need to know he is worth their efforts. She then suddenly pushes him down the junk pile into a pit below.

Rick gets to his feet and is suddenly confronted by a walker that has a steel helmet fitted over its head and metal spikes sticking out all over its body. He tries to fight it off but gets cut deeply in his hand and leg. Michonne (Danai Gurira), watching through a pipe stuck in one of the junk piles, yells to Rick to use the junk to his advantage.

Rick listens and brings a large pile of garbage down on the walker. He then decapitates it, with the female leader tossing him down a rope.

Once he climbs back up to her, she tells him that she will join him if he can provide her group with guns. Rick agrees, and before he and the others depart she reveals her name to him: Jadis.

At The Kingdom, Daryl goes out to visit Carol. She tells him why she left Alexandria and why she is living in isolation now. When she asks if the Saviors killed any of their group, Daryl lies to spare her the pain of knowing that Glenn and Abraham are dead.

The episode ends with Daryl chastising Morgan for not encouraging Ezekiel to join their fight. Then Daryl, now armed with a new crossbow, leaves The Kingdom for Hilltop.