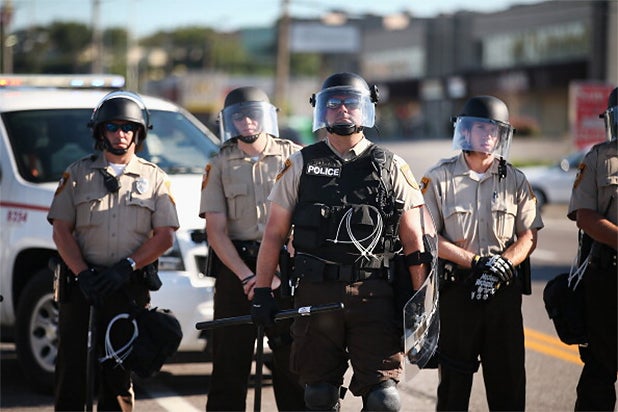 Huffington Post reporter Ryan Reilly and Wesley Lowery of the Washington Post were inside a McDonald’s working on their stories, when police asked them to leave, according to the journalists’ Twitter feeds.

“Officers decided we weren’t leaving McDonalds quickly enough, shouldn’t have been taping them,” Lowery tweeted, explaining why he was arrested.

After a short detention, Lowery told his Twitter followers, “Released without any charges, no paperwork whatsoever.”

Reilly also wrote a lengthy Facebook post alleging police brutality. “A Saint Louis County police officer in full riot gear, who refused to identify himself despite my repeated requests, purposefully banged my head against the window on the way out and sarcastically apologized.”

Earlier Wednesday, Lowery quoted a police officer as saying, “We cannot guarantee your safety. We will not be answering 911 calls.”

The St. Louis suburb has become an increasingly violent and chaotic scene since Saturday, when 18-year-old Brown was shot and killed by a police officer.

Ferguson police chief Tom Jackson told local TV station KMOV Wednesday that the officer “was hit” and the “side of his face was swollen” after a physical altercation with Brown.

According to multiple media reports, the Ferguson Police Department has also alleged that Brown and the officer struggled over the officer’s weapon inside a police car, leading to the shooting.

However, eyewitnesses on the scene, including Brown’s friend who accompanied him, have told a different story. Brown’s friend said police approached them on the sidewalk and the two had their hands up when the police officer opened fire.

Members of the community have held a series of protests after Brown’s body was left on the sidewalk for several hours, sparking anger. The police department has thus far refused to release the name of the officer who shot Brown, citing safety concerns.

The situation in Ferguson has become so tense that the FAA issued a no-fly zone on Tuesday, over the area where protests have been taking place.

Monday was supposed to be Michael Brown’s first day at Vatterott College.