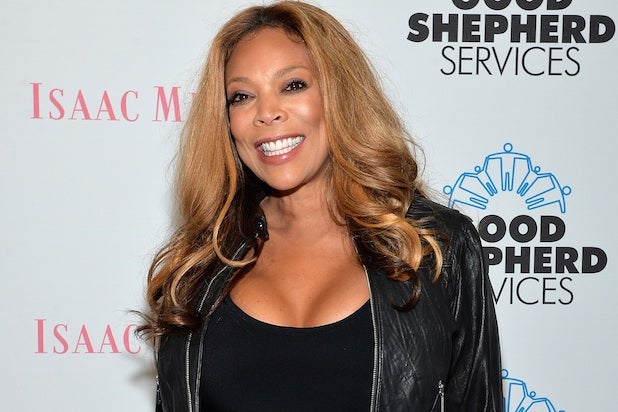 “For some time now, and even today and beyond, I have been living in a sober house,” she said.

Surrounded by a live audience, 54-year-old Williams detailed her daily routine, from waking up and going to work, to going to bed at 10 p.m. per the sober house’s “lights out” rule.

“So I go to my room, and I stare at the ceiling and I fall asleep to wake up and come back here to see you. So that is my truth,” she said to applause. “I know, either you are calling me crazy or the bravest woman you know. I don’t care.”

Williams explained that up until that point, not even her parents knew her living situation. The only people who knew were her  her husband Kevin Hunter and her son Kevin Hunter Jr.

“When you see me come to work, glammed up, right after the show, I go across the street, I do my Pilates. I told you, two hours a day… to take care of my body,” she said. “And you know I’ve had a struggle with cocaine in my past. I never went to a place to get the treatment. I don’t know how, except God was sitting on my shoulder and I just stopped.”

Highlighting the work she’s been doing with The Hunter Foundation, a drug prevention non-profit organization she started with her husband and son, she encouraged anyone struggling with addiction to call their recently-launched 24-hour helpline, 888-5HUNTER, which she said has already helped to place 56 people in recovery homes.

In an interview with Entertainment Tonight last July, Williams spoke of her battle with cocaine and referred to herself as “a functioning addict.”

“I would report to work on time and I walked in and all of my coworkers, and including my bosses, would know but instead of firing me, you see, I would grab my headphones and arrogantly walk into the studio and dare them fire me because I was making ratings,” she said in the July interview. “… It’s a miracle I was able to stop.”

Williams returned to “The Wendy Williams Show” on March 4 after taking a break at the beginning of the year due to complications from Graves’ disease and a shoulder fracture.

“I am happy to tell you I am doing swell,” Williams said during her first show back earlier this month, according to Entertainment Tonight. “I’m at home and taking my thyroid meds and meditating and believe me, I am going to the gym seven days a week for two hours a day. Mother has not gained a pound!”

If you or a loved one is struggling with addiction, help is available.