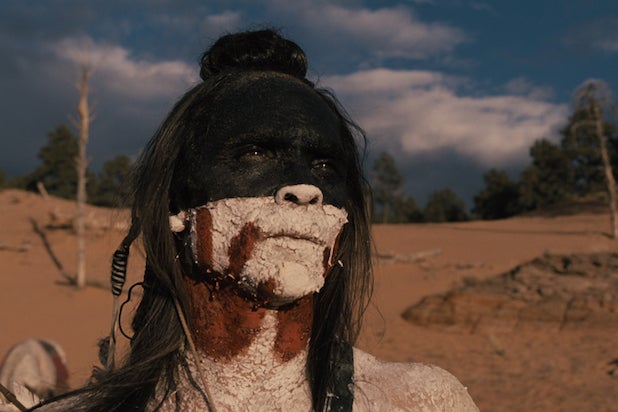 (Spoiler alert: Please do not read ahead unless you’ve seen last Sunday’s episode of “Westworld.”)

Alright, either someone royally screwed up during the filming of last Sunday’s episode of “Westworld” Season 2 or fans just found an incredible Easter egg, because some weird stuff was going on in the background.

The most recent installment of Jonathan Nolan and Lisa Joy’s HBO sci-fi series was a day in the limelight episode for Ghost Nation member Akecheta (Zahn McClarnon). Entitled “Kiksuya,” the story centered around his history in the park and how he came to the mission he is on today to help all the other hosts “find the door” out of Westworld.

But because you were so focused on all the moving moments going on the foreground, you may have missed what was either a giant oversight or extreme attention to detail in the background.

About halfway through the episode, we see Akecheta wandering around the park, and making his way into Sweetwater. Here is where you’re going to need to pause and look at the left side of the screen, as eagle-eyed Reddit user flickersense noticed you can see Maeve (Thandie Newton) in her Season 1 saloon getup, followed by a cameraman and crew. No, really, check out this screenshot if you don’t believe us:

So one of two things happened here. Well, one of probably 1,000 things is happening here, but for the sake of us not freezing all motor functions all day long, let’s get to the two most logical options.

The first is that these guys are totally supposed to be in the scene and are following Host madam Maeve to shoot footage for a promo video for the park. See, that checks out, right? It makes more sense that Nolan and Joy (who are crazy about tricking you with tiny little details) would throw this in as a treat for viewers who pay attention instead of the second choice: someone screwed up.

Yeah, mistakes happen, so there is a chance that while shooting from multiple angles for this episode (or a previous one, like the hour where the Cradle was revealed) they got this take and someone missed it in the edit bay. This explanation is backed up further when you notice that it looks like McClarnon is headed toward a green screen, so the actor may not even be walking in “Sweetwater” here, but rather the footage of the park was added later — footage they weren’t looking at that closely when they put it together. It’s hard to believe someone would make such a big mistake on a high-profile show that costs so much money to produce, but it’s always a possibility.

So, which side are you on: hidden detail or someone in the edit department is getting a talking-to?