CNN’s Clarissa Ward recently traveled undercover to a rebel-held area of Syria, where she witnessed 11 people die in an airstrike, but she didn’t miss a beat and reported on the chaos as it unfolded.

“I’ve seen the aftermath of airstrikes before, it’s deeply unpleasant and very frightening and chaotic. People are in shock and hysterical,” Ward told TheWrap. “There is a very surreal quality to all of it.”

She and her crew were among the first, and only, Western journalists to access the dangerous section of Syria in more than a year.

Ward, filmmaker Bilal Abdul Kareem and producer Salma Abdelaziz were filming at the top of a hill when the airstrikes hit and the plume of smoke was visible in the background of her video. Instead of taking shelter, they immediately jumped in a car and headed toward the devastation.

Upon arrival, Kareem made Ward wait behind as he assessed the situation. There was a “very obvious” threat of a “double tap,” which is when the planes circle back and strike the same spot twice.

The London-based Ward explained that Kareem said he is “used to it” and that similar attacks are “part of daily life” but, “on another level, you just never get used to it.”

Once Ward exited the vehicle, she witnessed everything from bloody survivors looking for help to various dead bodies. “It’s so shocking on a physical level. Your body responds with this surge of adrenaline, shock and fear. It all kind of collides in one,” Ward said. 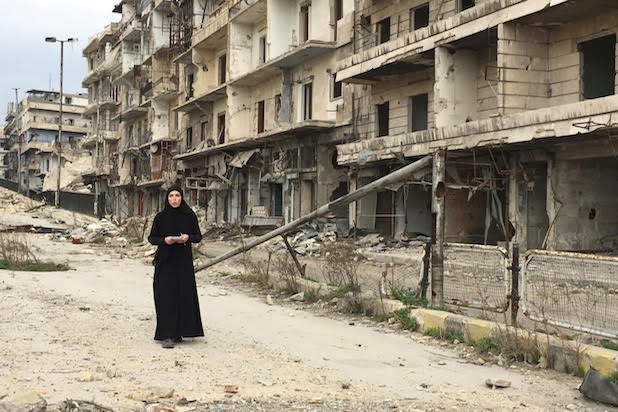 For that kind of reporting, the 36-year-old Yale graduate has already won just about every journalism award out there — Peabody, Emmy, DuPont, Murrow and a Royal Television Society award with CNN’s coverage of the Paris attacks last November. In November, she will be honored with the International Center for Journalists’ Excellence in International Reporting Award.

But Ward, who joined CNN last year from CBS News, said that being in the middle of airstrikes wasn’t even the most fearful moment of her young career. She pointed to her time covering the Syrian civil war in Aleppo in 2012 as something scarier.

“I remember waking up in the morning and hearing barrel bombs exploding around us and hearing the planes overhead,” Ward said. “Any time you hear planes, it’s obviously scary. You’re an idiot if you’re not afraid in those situations.”

Ward referred to the sound of the jets as a form of “psychological warfare” but said she reminds herself that, statistically, the odds of actually getting killed while working in the field are slim.

She compared reporting from a war zone to being a trauma surgeon but was quick to say, “Not that my job is as important.” But, like a doctor performing surgery, Ward said that she needs to keep calm during those high-pressure situations.

“You have to put aside anything that you might be feeling or thinking and just get on with it,” she said. “You can’t allow personal feelings of fear, panic or revulsion.”

The latest trip required six months of top-secret planning. Ward couldn’t get into specifics for “security reasons” but said that going undercover emerged as the only safe way to report the story.

Also Read: CNN Boss Jeff Zucker: 'I Am Not Considering Running for the Mayor of New York'

Journalists have been targeted by the Syrian regime in the past, so Ward wanted to be “as low profile as humanly possible.” 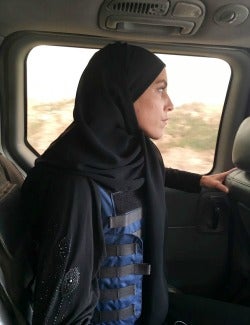 And once she arrived in the war-torn region, she felt “relatively comfortable” for the most part.

“We put so much work into coming up with this plan and spent so much time going through every single factor,” Ward said. “By the time the plan all came together and we were on the ground, I did feel pretty safe.”

Ward comes up with most of her stories and pitches them directly to CNN Worldwide President Jeff Zucker and CNN International Executive Vice President and Managing Director Tony Maddox.

“When she came to us with this enormously challenging Syria pitch, we knew it could only be achieved with careful planning that could not be rushed by the news cycle,” Maddox told TheWrap. “Her patience, resourcefulness and attention to detail gave us the confidence to go ahead with this high risk but crucially important story.”

And she has no desire to leave the field and work in a studio anytime soon. Ward will return to Syria when the “news dictates it’s necessary”; she left last time to head to Brussels after the city was attacked by terrorists last month.

As Maddox said, “One of the reasons CNN hired Clarissa is because she’s an incredibly talented journalist who is committed to telling stories the world needs to know.”

Check out Ward’s most recent report from Syria below.