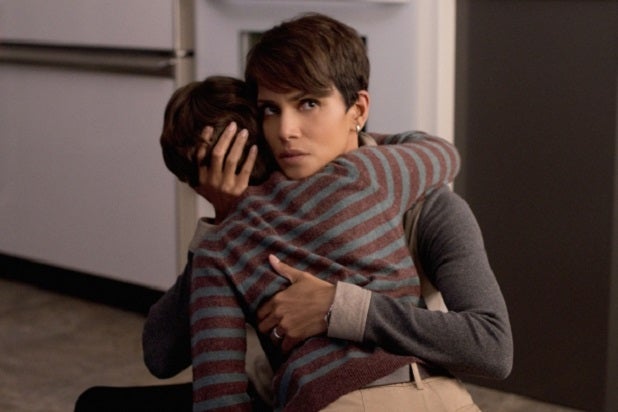 CBS’s upcoming summer series “Extant” gets way out there in more ways than one.

The series, which includes Steven Spielberg among its executive producers and debuts Wednesday, stars Halle Berry as Molly Woods, an astronaut who returns from a 13-month solo mission only to find out that she’s improbably pregnant. She and her husband, John (played by “ER” alum Goran Visnjic) have a young son — who turns out to be an android.

If that weren’t enough to puzzle over, the series also includes a pair of astronauts who may have died. But possibly not.

And that’s just the first episode.

TheWrap spoke to series creator Mickey Fisher and executive producer Greg Walker in an effort to make sense of it all.

The first episode deals with the question of what constitutes life on a couple of levels: there’s a son who’s a remarkably lifelike android, and a pair of astronauts who have died, but continue to live on in some manner. How deeply will that question be explored throughout the season?

Mickey Fisher: That’s really a lot of where the series lives. It’s one of the essential themes that Greg and I really connected on, early on, this question of what it means to be human. And how do we ensure that what makes us human survives in the face of all these new challenges — the discovery that we’re not alone in this universe, or the rise of this powerful artificial intelligence? That sort of question — are we more than just this collection of information, or is there something more divine or supernatural about it? The series lives there a lot.

What year is the show supposed to be set in? It’s not entirely made clear in the pilot.

Fisher: We’ve always kind of thought of it as 20 to 30 years out — in the classic term of the genre, the not-too-distant future. But we didn’t put a specific date in because we wanted to give ourselves a bit of creative freedom and conjure up new things, but also look at where technology might evolve to at that point. But not tie ourselves up, so that people can hopefully just focus on the characters and the story, and not try to pull it apart.

There’s some cool technology on the series. Is it a challenge to present this advanced technology in an everyday setting and not make viewers feel like they’re watching “The Jetsons”?

Fisher: We put a notecard up on the writers’ board from the very beginning that says, “Cool stuff gets thrown away.” And not literally, in the trash, but we don’t make a big deal out of it. It’s never featured. Our focus has been on the characters and the story. I know that sounds kind of pat, but you could spend all day thinking about cool gadgets; one of the traps of the genre is to put the focus on the toys of the future rather than the thoughts and the ideas.

We just try to direct our attention towards the story: There are some episodes that have great toys, but there’s some episodes that there’s not one single one in there. It’s a real challenge to kind of mute the future, so it looks relatable and approachable. And on a character level, that seems to make more sense, too; I live in a house built in 1927, but there are iPads strewn about. There’s this tension between yesterday and today that we like to play all the time.

The android son, Ethan Woods (played by Pierce Gagnon), comes across as just this side of Damien from “The Omen” throughout much of the first episode. Is it a challenge to create a child character that doesn’t hit all of the typical emotional triggers that kid characters on TV usually hit?

Fisher: There definitely is an element of that — a lot of people, when they’re watching the episode, you get that vibe that there’s a little bit of a bad seed there. But it really kind of goes back to that core theme of the show, about what is human. The idea on the show is that [the androids are] gonna be programmed by human experience. So in some ways it’s just trying to learn right and wrong the way a kid would. And so you look at it through the prism of that, and then those moments are not necessarily as overtly sinister as they are sort of misunderstood. It’s actually kind of a fun thing for us to play with with the kid — you put him in those scenarios, and how would a normal kid learn in this situation, and how is it different for an android kid?

It can be disorienting — he’s so lifelike that it’s easy to mistake him for human, and yet he’s this man-made creation.

Fisher: It’s a challenge from a performance level, and Pierce has been pretty incredible. We wanted to build in a delay response, so that he would have to process the way an A.I. would, in that it’s trying to learn from its external stimuli and not always have an immediate response the way a kid would. It’s a lot to ask of a nine-year-old boy to not be yourself and not act the way you would in that situation. Of course, he’s an actor, but he’s remarkably skilled in being able to put in that little bit of a lag that we think signifies the way the machine would process the emotions that it’s given.

Just how expensive is it to produce a series that’s partially set in outer space?

Greg Walker: We don’t have an unusual budget for an hour-long drama on a network show. We’re not a super-expensive show and we’re not a super-cheap one either. I think the challenges are being able to bring the Spielberg aesthetic to television on a regular budget. Sometimes it requires a lot of innovation from our effects department and our crew and our director of photography. But often it just requires storytelling focusing on the things that really matter, which are the emotional stories, as opposed to the whiz-bang summer blockbuster moments. We need those, but we have to be careful about how we dole those out.

Walker: It’s like feeding your children and it’s like, “OK, where’s the spinach?” Then you get dessert. Dessert for us is people floating around in space. It’s great, but you don’t start out the meal with it. If you’re good, you get Zero G.

In addition to “Extant,” there’s the upcoming ABC series “Astronaut Wives Club.” What’s behind the ongoing fascination with space travel?

Walker: I’m a child of the Apollo generation, and I was fascinated as a kid. I had a lunar module lander model that I built with my dad. “The Right Stuff” blew me away when I saw it. It’s always been part of our hero story about this kind of ascension into the unknown. I felt sci-fi kind of lost touch with that a little bit, because so much of it had an emphasis, usually, on the kind of world stakes in every single movie; on the global stakes, as opposed to the wonderment of space. Very few people were able to get meditative about space, and then when I read Mickey’s script, I loved the quiet calm and the sense of intrigue and awe about space travel.