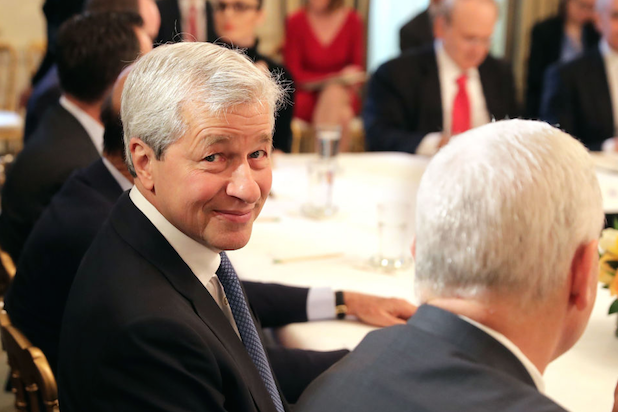 JP Morgan Chase CEO Jamie Dimon may not believe in bitcoin — but banks like his are the reason it exists, a prominent investment manager tells TheWrap.

But investor Ross Gerber says that’s pretty rich, coming from someone that presided over a bank that needed a $12 billion government bailout in 2008.

Also Read: Why Apple's ARKit Could Be a 'Game Changer' for Augmented Reality

“The only reason Bitcoin exists is because these greedy bankers went bankrupt in ’08,” Gerber told TheWrap. “They destabilized the world’s financial system to such a point that these guys came up with an algorithm to come up with their own money, because our system was so broken by the likes of Jamie Dimon and his banking buddies.”

“The only reason Bitcoin exists is because of Jamie Dimon,” Gerber, the president and CEO of Los Angeles-based Gerber Kawasaki Wealth and Investment Management, continued.

“It’s worse than tulip bulbs. It won’t end well. Someone is going to get killed,” said Dimon at a Barclays meeting. “Currencies have legal support. It will blow up.”

Topping it off, Dimon said he’d “fire in a second” any JP Morgan Chase employee trading bitcoin. He might not want to check Linkedin, where more than 50 JP Mogran Chase workers have “blockchain” — bitcoin’s underlying “ledger” technology — in their profiles.

Bitcoin was created in January 2009 by Satoshi Nakamoto — only months after the collapse of the U.S. housing market. Bitcoin isn’t subject to government regulation, but each transaction is marked on its immutable digital ledger.

Gerber told TheWrap that he, like Dimon, was skeptical of cryptocurrency at first. But he invested in bitcoin two years ago, after his friends convinced him its decentralized technology was a worthwhile bet.

Gerber said there are still “enormous risks” involved with bitcoin, and that it will deal with growing pains as it continues to become a more widely accepted form of payment. Online currency exchanges shuttering on a whim — like Mt. Gox vanishing in 2014, along with $460 million worth of bitcoin — has made many investors wary. But the current political climate has made it clear to Gerber our financial system isn’t as foolproof as it seemed in 2015.

Since Trump took office, bitcoin speculators have been smiling from ear-to-ear. Its price has quadrupled since the president’s inauguration on Jan. 20. In the meantime, it has become increasingly popular across the globe, with Japan legalizing it as a payment method, and Russian President Vladimir Putin putting $100 million into bitcoin “mining” — the computer technology that generates new bitcoin.

Bitcoin has taken a hit in the last week, between China cracking down on domestic cryptocurrency exchanges and Dimon’s comments.  But Gerber believes Dimon, banks, and “their corrupt business models” have only contributed to the hazy political culture and made bitcoin more appealing.

“Let’s be real, Jamie. It’s here and it’s not going away in this Trump era,” said Gerber. “Anybody who thinks a decentralized monetary system is a bad idea, hasn’t been looking around the world recently.”