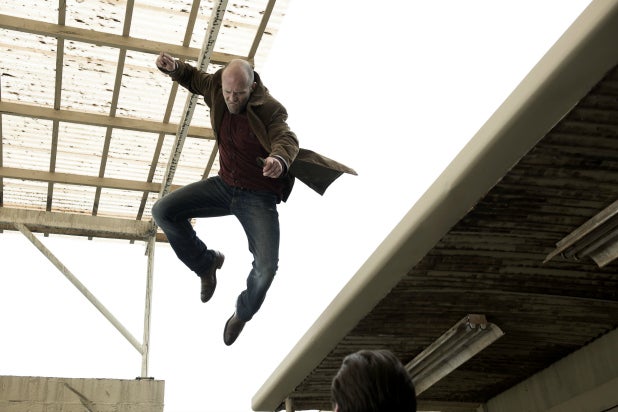 The combination of cast and crew involved in “Wild Card” will cause any reasonably informed filmgoer to do a double-take with almost as much force as one of star Jason Statham‘s spin-kicks. The real surprise in this film directed by Simon West (“Con Air,” “The Expendables 2”)  comes when you realize that the script is by the legendary William Goldman of “Butch Cassidy and the Sundance Kid,” “The Princess Bride,” “All the President’s Men” and too many other classics to count.

More intrigue comes when looking at other participants, whether in the supporting cast — which includes Sofia Vergara, Stanley Tucci and Michael Angarano — or in luminaries behind the scenes like legendary fight choreographer Cory Yuen (“The One,” “The Expendables”) and cinematographer Shelly Johnson (“Captain America: The First Avenger,” “Jurassic Park III”).

The excitement at the idea of a new script from Goldman, though, dissipates when you realize that “Wild Card” is a remake of “Heat,” a 1986 film of Goldman’s 1985 novel that knocked Burt Reynolds off his perch atop the box office. On one hand, far worse films have been remade by far less talented people; on the other, it’s hard to not feel a slight sense of disappointment when what looks like a steaming hot slab of fresh action filmmaking hot off the grill turns out to be microwaved leftovers.

Statham’s Nick Wild is a freelance security consultant in Las Vegas; he knows every pit boss and hotel maid in town, helps out his friends, and takes on the less crazy clients. But between Nick’s bare knuckle brawls and his bad bets at the gaming tables, it becomes fairly apparent pretty quickly that Nick’s talent for demolishing other people is surpassed only by his capacity for destroying himself.

A knight without armor on the seedy streets of Sin City isn’t a bad start for this kind of story, and soon Nick is caught up in the needs of a new client and an old friend. Nervous nerd Cyrus Kinnick (Angarano, with goofy body language and a perfectly strangulated weird laugh) wants Nick to be his bodyguard; call girl Holly (Dominik García-Lorido, “Magic City”) asks Nick to find and punish the man who savagely beat her before dumping her in the ER parking lot. Nick figures out that her assailant is Danny DeMarco (Milo Ventimiglia, majestically sleazy), son and heir of an East Coast crime lord. DeMarco is theoretically untouchable; Nick decides to test that theory at close range.

In theory, all of this sounds like enough to wrap a crime film around, but the cold hard fact is that director West moves the film along like it’s in a haze of torpor, long moments of soul-searching with exactly four fight sequences stretched between them, making for 92 minutes that feel like forever. What made Statham an action hero isn’t just the flair of his fisticuffs but also the light in his eyes, a combination of muscle and man that never meshes here; something in the direction makes Statham seem stuck and stranded, as if he, like we, were just killing time between the stunts.

There’s a few fleeting touches on the Dostoyevskian dichotomy of gambling here — Are Nick’s bad bets his lowest moments, or when he feels most alive? Does he put the money down to win more, or to lose? — but West is no Dostoyevsky. The film has the hazy-bright look of a liquor commercial, and worse, isn’t that much fun. And while it’s hardly a slander to note that screen presence Burt Reynolds wasn’t that great an actor, it’s also fair to note that Statham is no Burt Reynolds, with his natural charm sputtering out in the void between plot points. Stanley Tucci gets one perfect scene as a silky, soothing fixer and Vegas institution; the film could have used a lot more of his elegant griminess.

Also Read: ‘The Gambler’ Review: Mark Wahlberg Folds Despite a Jackpot of a Supporting Cast

Director West doesn’t bring much to the proceedings either, even with the R-rated language, flesh and violence; there’s only so many angles from which to shoot Vegas at night, but at the same time, it’s a welcome change that Nick’s Vegas is more strip mall than The Strip’s glittering palaces, a blue-collar town of diners and loading docks, store rooms and cargo elevators.

“You’re not supposed to like Vegas,” Nick notes at one point. “It’s a virus some people come down with.” Goldman’s words have snap and punch, even in what amounts to a second go-round, but West’s pacing is drastically off, with ostensible payoffs to many character relationships coming out of nowhere in the rush to get Nick, and us, to the finale so that rough justice might be served. Delivering boredom when it promises mayhem, “Wild Card” is a bad bet that doesn’t pay off for either the film’s makers or its audience.