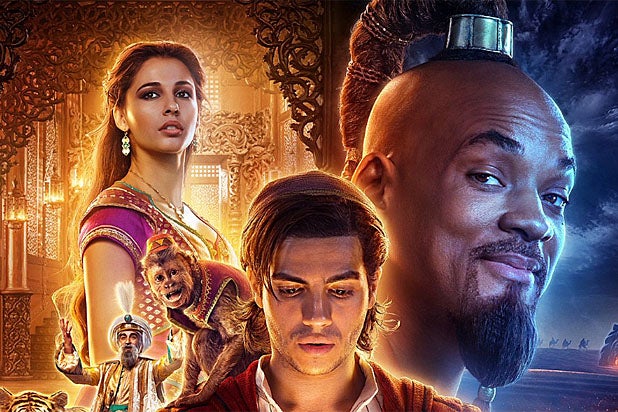 As has been a recent annual tradition, Disney will release a new film for Memorial Day this weekend, and this year’s offering is Guy Ritchie’s remake of the Disney Renaissance classic “Aladdin,” starring Mena Massoud as the heroic street rat and Will Smith as his wacky Genie.

It’s one of two Renaissance remakes on tap from Disney this summer, the other being “The Lion King” in July. Both have the potential to add to the billions the studio has already grossed this year from Marvel Studios, but first “Aladdin” will have to overcome the weak social media buzz that has brewed around it, as well as a very tough set of competing films set to come from other studios in the next few weeks.

“Aladdin” is the second live-action Disney remake this year, following “Dumbo” which came out in March. They’re the first live-action remakes since “Beauty and the Beast” two years ago. But where “Beauty” enjoyed  huge success with $1.26 billion worldwide, Dumbo landed with a relative thud, making $346.9 million on a $170 million budget.

If “Aladdin” wants to at least beat that, it’s going to have to inspire more positive reactions from audiences than its marketing campaign has. That challenge was apparent early-on with reaction to the sneak peek TV spot that aired during the Grammys in February; on Disney’s YouTube channel, the clip has received over 109,000 dislikes against 66,000 likes. More recently, a clip of Will Smith’s CGI-augmented portrayal of the Genie singing “Prince Ali” was similarly received.

Between this pre-release word of mouth and heavy competition, tracking for “Aladdin” is lower than those of past Disney remakes. One tracker is projecting a 4-day opening of around $80 million, while another is expecting far lower at $65 million. Disney is projecting an opening of $75-85 million.

An opening at that range would be notably lower than the $174 million opening for “Beauty and the Beast,” which opened to much less competition in March 2017. It would also be lower than the $103 million opening for “The Jungle Book,” which released in June 2016. But this is common for Disney in recent years, as Memorial Day has yielded weaker returns for installments of many of their franchises. The $78.5 million 4-day opening for “Pirates of the Caribbean: Dead Men Tell No Tales” in 2017 was the lowest domestic start for any “Pirates” sequel, and the $103 million 4-day launch for last year’s “Solo” led to that film becoming the lowest-grossing “Star Wars” release ever.

On the other hand, an $80 million opening would also be notably higher than other recent Memorial Day Disney films like “Tomorrowland” ($42.6 million) and “Alice Through The Looking Glass” ($33.5 million). And consider this: a 3-day opening for “Aladdin” of $60 million would be a higher opening than every non-Disney release in 2019 with the exception of the $71 million opening of “Us.” That’s how dominant Disney has been at the box office through the first half of the year.

That’s in week one. Next week will see the release of “Rocketman,” an Elton John biopic musical that has received serious buzz from its Cannes premiere and could split off adult moviegoers looking for a fun, song-filled time at the movies. A week after that, “The Secret Life of Pets 2” could take another hit to “Aladdin” by splitting off family audiences.  Audience reception scores will reveal whether “Aladdin” can show any lasting power in the face of such heavy competition.

“Aladdin” is directed by Guy Ritchie and stars Smith, Mena Massoud, Naomi Scott, Marwan Kenzari, Navid Negahban, Nasim Pedrad, and Billy Magnussen. The film does not yet have a Rotten Tomatoes score, with review embargo dropping on Wednesday.

Also releasing this weekend is Olivia Wilde’s critically acclaimed directorial debut, “Booksmart.” Releasing on 2,500 screens from Annapurna and United Artists Releasing, the film is projected for a 4-day opening of around $12 million. The film stars Kaitlyn Dever and Beanie Feldstein as two studious high school friends on their way to graduation who decide to enjoy one night of the irresponsible teen antics that they held off on to get into a good college. The film has a 100% Rotten Tomatoes score with 72 reviews logged.

Finally there is Sony/Screen Gems horror/sci-fi film “Brightburn,” which stars Jackson A. Dunn as a superpowered boy who, like Superman, is a strange visitor from another world adopted and raised by farmers. Unlike Superman, the rise of Brandon’s powers also comes with a desire to destroy the world. The film is projected for a $12-16 million 4-day opening.

Elizabeth Banks and David Denman also star in the film, which is directed by David Yarovesky. “Guardians of the Galaxy” director James Gunn is producing, with his cousin Mark Gunn and brother Brian Gunn serving as screenwriters.