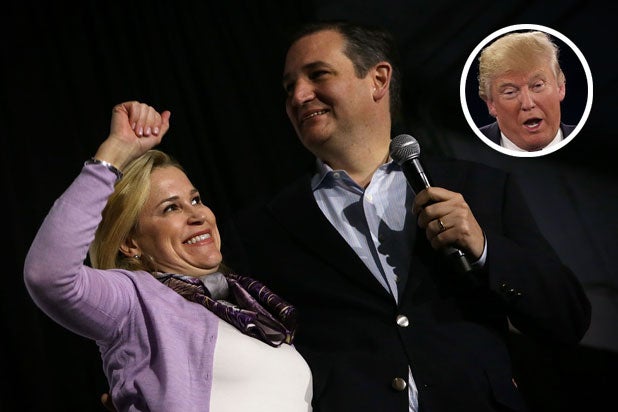 President Trump and the First Lady are having dinner with Ted and Heidi Cruz at the White House tonight, which happens to be the evening of International Women’s Day. It is fair then to wonder if the president will use the dinner as an opportunity to apologize to Heidi Cruz for disparaging remarks he made about her during the GOP primary race.

Trump and Cruz were bitter rivals during the primary and at one point Trump retweeted a post from a follower comparing Heidi Cruz and Melania Trump, based solely on appearance. The retweet is still up on Trump’s feed.

During Wednesday’s White House press briefing, NBC’s Hallie Jackson asked Press Secretary Sean Spicer if the President had any intention of apologizing to Cruz for the attacks.

In an op-ed last year, New York Times columnist Maureen Dowd recounted a conversation with Trump in which he issued a rare admission of wrongdoing, saying, “Yeah, it was a mistake. If I had to do it again, I wouldn’t have sent it.”

It all started the night before the offending retweet, as polls closed during the Western Tuesday primaries. On Twitter, Trump wrote, “Lyin’ Ted Cruz just used a picture of Melania from a GQ shoot in his ad. Be careful, Lyin’ Ted, or I will spill the beans on your wife!”

That tweet was a response to a meme posted by the Super PAC Make America Awesome on Facebook, in which Trump’s wife was pictured naked on a fur pelt, accompanied by the words, “Meet Melania Trump, your next first lady. Or you could support Ted Cruz on Tuesday.”

Cruz responded via Twitter moments after Trump’s tweet. “Pic of your wife not from us. Donald, if you try to attack Heidi, you’re more of a coward than I thought. #classless.”

Trump’s juxtaposition of the Texas senator’s wife and his own former model wife followed shortly thereafter. Cruz famously refused to endorse Trump at the GOP convention as a result, but eventually came around and supported his party’s nominee.