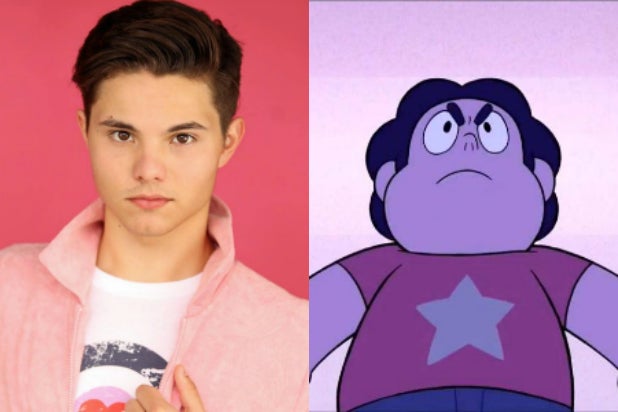 When “Steven Universe” started on Cartoon Network four years ago, its titular character was a silly, carefree boy (voiced by Zach Callison) singing about the glory of Cookie Cats and his longing to see his alien friends, the Crystal Gems, turn into a Giant Woman. But while he’s kept his fun-loving, kind-hearted spirit intact over the years, he’s had a lot of tough maturing moments to go through.

Over the past year, “Steven Universe” has put Steven’s search for purpose front and center as the idealistic image he preserved of his late mother, Rose Quartz, was chipped away. His pacifist philosophy had been built in good part on the belief that his mother never killed anyone, only for him to discover that his mother did indeed have a dark side that his family hadn’t told him about. Now, after a season trying to forge an identity for himself without his mother’s example to guide him, Steven will face his greatest challenge yet in “Wanted,” a one-hour Memorial Day special that will feature the long-awaited introduction of Homeworld, the planet of the Crystal Gems.

Like many recent episodes, “Wanted” promises to provide some very dramatic and emotional moments for Steven, all of which have been brought to life by voice actor Callison. In advance of this Monday’s special, 19-year-old Callison spoke with TheWrap about how Steven’s growth as a Crystal Gem has coincided with his growth as an actor.

TheWrap: Season 4 has been focused a lot on Steven coming to terms with both his past and future. When you read the script, were there any parts of Steven’s journey that have surprised you?
Zach Callison: Steven has really come into his own in recent episodes; his choice to leave for Homeworld and sacrifice himself to save his family is reflective of how far he’s come since the events of the first season in his understanding of his past and the role he has inherited. It’s been so fulfilling and teaching to grow up at the same time as him.

You’ve been a part of a lot of popular “Steven Universe” songs over the course of the series, but are there any musical numbers Steven’s not a part of that you wish you could have sung?
Truthfully, no. The reason being that my favorite non-Steven songs (“It’s Over, Isn’t It?”, “Stronger than You”) are perfect as they are. I couldn’t add anything to what Deedee and Estelle have already accomplished within them. I can certainly listen to them over and over, though.

It’s not often that we get to see Steven’s human relationships cross over with his life as a Gem, but now he’s headed to Homeworld with Lars instead of the other Gems. Were you surprised that this happened?
I was warned in advance that Lars would play a part in this arc, and I was really happy to hear it. I love working with Matthew [Moy] and it’s exciting to see him play Lars with the new challenge of being face-to-face with Homeworld gems. The next few episodes have some awesome moments for him.

You mentioned in a Reddit AMA last year that you haven’t had a chance to do a recording session with Tom Scharpling, who plays Steven’s dad, Greg. With all the episodes this past season where Greg and Steven talk about Rose, were you two able to finally spend some time in the studio together?
We haven’t! It’s one thing that has escaped us as a cast these past several years. In fact, we’ve still only met in person one time in San Diego … but I have a ton of respect for him as Greg and for his hilarious comedy work outside of the show.

Over the past four years, how have you had to change your approach to playing Steven?
No role that I’ve ever played has had to evolve like Steven. As I mentioned, we’ve really grown up alongside each other in more ways than one. Playing Steven has been an incredible education for me as an actor, specifically when it comes to playing a “voice” versus being a character. I learned over the course of our first few records that there had to be a lot more to Steven than a crazy cartoon voice in order to do the writing justice. That lesson has spilled over into my on-camera acting, as well.

On a more literal note, my voice also changed during the run of the show … for a while I simply didn’t know how to use my instrument anymore, and it was a very stressful period for me. Having weekly Steven recording sessions gave me a road map to figuring my voice out again.

From “Orange Is The New Black” to “Younger,” get all caught up with your favorites shows before they return with new episodes next month

Not traveling over the long weekend? Don't worry, we've got you. Catch up on these series with premieres in June.