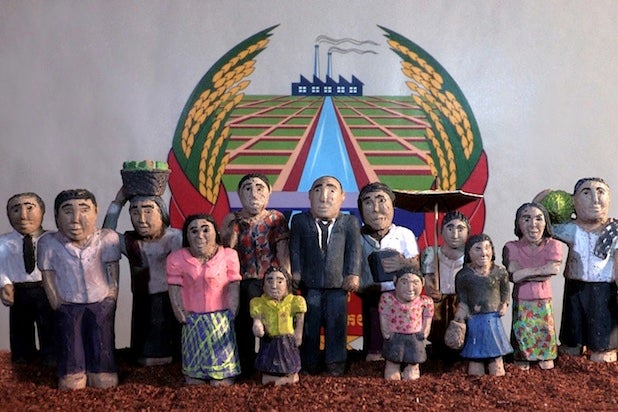 This year’s race for the Best Foreign Language Film Oscar doesn’t have a clear favorite likely to dominate the race the way “Amour” or “A Separation” did the last couple of years, but it does have a few obvious frontrunners.

As the end of first-round screening goes into its final two weeks, “A Separation” director Asghar Farhadi’s “The Past” clearly stands a good chance of being on the nine-film shortlist. So do Thomas Vinterberg’s “The Hunt,” Paolo Sorrentino’s “The Great Beauty,” Haifaa al Mansour’s “Wadjda” and Wong Kar Wai’s “The Grandmaster,” all of them high-profile foreign films with U.S. distribution.

But given the Academy’s two-step process, which mixes the vote of volunteers with the choices of small, hand-picked committees, dark horses always emerge – and this year’s potential sleepers include a Belgian tragedy with bluegrass music, an Icelandic movie in which the most human characters are the horses and a Cambodian documentary that uses clay figurines to come to terms with a history of atrocities.

This could be the last year for the current system, with the Academy’s Mark Johnson promising to take a hard look at potential changes. Meanwhile, members are in their final two weeks of viewing and scoring the category’s record 76 entries.

Their screenings began on Oct. 11 with a double bill of Japan’s “The Great Passage” and Uruguay’s “Anina,” and will run until Dec. 16, when Morocco’s “Horses of God” will be the final film shown to members. At that point, the top six films, by average score, will be revealed to an executive committee, which will choose three more films to make up a nine-film shortlist that will be released before Christmas.

Of the films that have screened for the committee, voters initially seemed to be underwhelmed, based on conversations with members. But buzz has been good on films like Croatia’s “Halima’s Path,” Russia’s “Stalingrad,” Turkey’s “The Butterfly’s Dream,” among others.

Leaving aside the obvious choices like Iran’s “The Past,” Denmark’s “The Hunt,” Saudi Arabia’s “Wadjda,” Chile’s “Gloria” and Italy’s “The Great Beauty,” here are dark horse contenders worthy of note. Consider this a personal shortlist of sorts  – with the caveat that while I’ve seen more than 30 of the qualifying films, I’m less than halfway through the full field of 76.

ISRAEL, “Bethlehem,” Yuval Adler; and PALESTINE, “Omar,” Hany Abu-Assad
Much of the strongest buzz around this year’s race has centered on a pair of films linked both by geography and by subject matter. The Israeli and Palestinian entries are both strong, tense dramas, and both deal with the relationship between an Israeli secret-service agent and his Palestinian informant. Together, they take a personal and nuanced look at an untenable situation.

CAMBODIA: “The Missing Picture,” Rithy Panh
One of the most odd and inventive of the eligible films, “The Missing Picture” tells the story of the abuses of Cambodia’s Khmer Rouge regime – whose victims included many members of director Rithy Panh’s family – through elaborate staged scenes with clay figurines. The technique might seem as if it would put some distance between the account of the events and their depiction, but the restraint even makes the telling more gripping.

ICELAND: “Of Horses and Men,” Benedikt Erlingsson
You have not seen this on screen before: a series of linked vignettes about men, women and horses in a remote coastal section of Iceland. There are deaths, near-deaths, a horse-sex scene played for laughs and a survival scene that is hard to watch – and the result is so singular and so memorable that it could well make passionate advocates out of those who can take it.

BRAZIL: “Neighboring Sounds,” Kleber Mendonca Filho
A.O. Scott of the New York Times put this on his list of the best films of 2012, though it wasn’t released in its home country until early 2013.  A subtle and incisive look at a society where paranoia is rising, its critical reputation may make it a strong candidate for an executive committee “save.”

LITHUANIA: “Conversations on Serious Topics,” Giedre Beinoriute
The conversations in question are with children, and the film is nothing but those conversations, shot against the plainest of backdrops. It’s a movie of kids talking, a viewing experience that reportedly goes from boring to fascinating over its short, 65-minute running time.  (I haven’t seen it yet, but talking to people who have made me want to put it on my list.)

ROMANIA: “Child’s Pose,” Calin Peter Netzer
Romania has produced some of the most vital European cinema of recent years, but the Academy has not recognized films like “4 Months, 3 Weeks and 2 Days,” “12:08 East of Bucharest” and “Police, Adjective.” Netzer is attempting to do what countrymen Corneliu Porumboiu and Christian Mungiu couldn’t, and land his country’s first Oscar nomination; he’s doing so with an austere, troubling drama about a mother trying to keep her callous son out of jail.

SERBIA: “Circles,” Srdan Golubovic
An act of violence reverberates over the years in Golubovic’s haunting drama, which begins with a killing in the final days of the Bosnian war and then picks up the characters a decade later. Three different stories interlock and resonate, and the storytelling is tense and urgent throughout.

TURKEY, “The Butterfly’s Dream,” Yilmaz Erdogan
It’s set during World War II, a conflict long beloved by voters in the category. It’s corny and sentimental, but since when has the Academy been adverse to that? And “The Butterfly’s Dream” is also a moving, beautifully shot love story that reportedly played well to the general committee voters.

Other films to watch out for include Canada’s “Gabrielle,” Russia’s “Stalingrad” and Croatia’s “Halima’s Path,” which some committee members say went over well; Chad’s “Grisgris” and Australia’s “The Rocket,” strong films that have won raves on the festival circuit; Singapore’s “Ilo Ilo,” the United Kingdom’s “Metro Manila”and South Africa’s “Four Corners,” which have good buzz; and Mexico’s “Heli” and the Netherlands’ “Borgman,” which would almost certainly need executive-committee saves to advance.