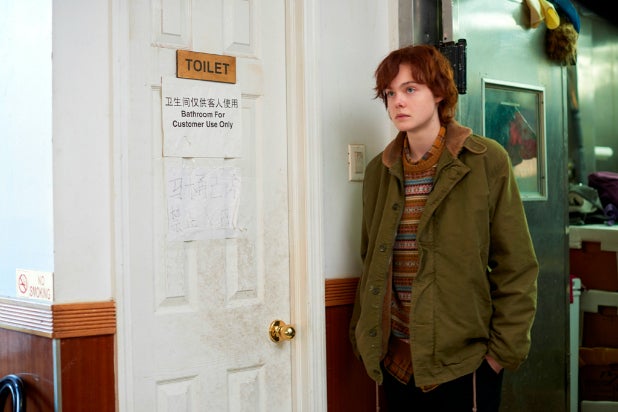 “3 Generations” premiered at the 2015 Toronto Film Festival under the title “About Ray,” and it’s just as well that they changed the name — and not just because “It’s a Shame About Ray” is such low-hanging catnip for lazy headline writers.

Ray, played by Elle Fanning, is a trans male teenager who’s eager to start testosterone therapy, and would that this movie were indeed about Ray. Instead, it’s yet another film where non-trans people learn valuable life lessons, complete with lots of hugs, while the actual trans character’s story takes a backseat. (At one point, Ray yells at his mother, “Can you stop making my problems into your problems?” but the movie never honors that request.)

It’s a film that positively reeks of good intentions, but it’s so timid and tentative — the words “trans” and “transgender” are never uttered aloud — that it feels as hopelessly retro as casting a cisgender actress in the lead. Fanning does fine work, but the current habit of not hiring trans performers to play trans characters is going to feel very dated very soon.

High-schooler Ray skateboards, DJs and shoots a documentary of his own transition. Since Ray is only 16, however, he needs parental consent to start injecting himself with “T,” and the necessary forms wind up dominating the film. (There is more discussion of signatures and paperwork than there is of gender.)

Ray’s artist mom Maggie (Naomi Watts) seems to be accepting of Ray’s transition, even though that consent form dredges up a certain level of skittishness. It doesn’t help that Maggie’s mom Dodo (Susan Sarandon) remains baffled by the process, wondering why her granddaughter Ramona can’t just be a butch lesbian instead. (Ray and Maggie live in the boho-chic multi-level New York City apartment owned by Dodo and her lover Frances, played by Linda Emond.)

The form also requires a signature from Ray’s father, which forces Maggie to reach out to her long-estranged lover Craig (Tate Donovan), and his sudden reappearance leads to a great deal of familial upheaval, none of which is particularly interesting. His reticence to give his approval, even after a pronounced absence from his child’s life, does at least push Ray to finally chop his hair from floppily androgynous down to buzzed.

Sitting on the shelf for a year and a half didn’t help, but “3 Generations” must have felt anachronistic from the get-go: Yes, many parents have a difficult time understanding their children’s transitions, but the characters presented here are all artsy New Yorkers, so the idea that they’ve had no interaction with trans people never rings true. As for Ray, he has not one trans friend — not even online, where he would presumably be posting his auto-documentary shorts on YouTube and finding others going through similar life stages. And given that he’s known he was a boy since the age of four, he seems ill-equipped to discuss the subject with his well-meaning relatives.

(Watch the TV show “I Am Jazz” or almost any documentary about real trans teens, and you’ll see people who have done the homework and demanded that their loved ones do likewise.)

The film indulges in the sort of milquetoast storytelling that allows audiences to feel cozy about their own prejudices, and then to feel like they’ve solved problems for minorities by the time the closing credits roll. Watts and Sarandon do what they can, but these characters are so wobbly on the page that there’s not much to do in the execution, particularly when director Gaby Dellal (who also co-wrote with Nikole Beckwith) put them in wacky situations (involving Maggie’s sex life or Dodo’s old car) that don’t jibe with the rest of the movie.

If there’s one standout facet of “3 Generations,” it’s the sublime cinematography by David Johnson, who takes the natural light of a wintry New York and creates a warmth and intimacy for one of the most filmed cities on Earth. It’s a shame that the screenplay can’t do nearly as much for these characters.