The multiplex match-ups of fall and the holidays may not feature the battles between megabudget blockbusters that this summer did, but they have the added intrigue that the awards season brings.

There are several head-to-head battles between prestige Oscar hopefuls and films that, well, aren’t prestige or Oscar hopefuls. A lucky few movies may combine awards appeal with commercial success, but that’s not easy. Last year, when six of the nine Best Picture Oscar nominees crossed the $100 million mark domestically, was an anomaly.

On the heels of a record-breaking summer that made up for a lackluster spring, the overall box office is at $1.18 billion, roughly one percent ahead of where 2012 was at a similar stage.

To top last year’s final total of $10.8 billion, big-ticket entries like “Thor,” “The Hunger Games: Catching Fire” and “The Hobbit: The Desolation of Smaug” will have to deliver, as will Oscar hopefuls like “Gravity” and “American Hustle.”

But the remainder of the year is nearly as crowded as this summer was, and that means that every film can’t possibly connect and there may be some serious casualties. You’ll note that there is only one November matchup. That’s because “Thor” and “Catching Fire” have scared most of the competition off. 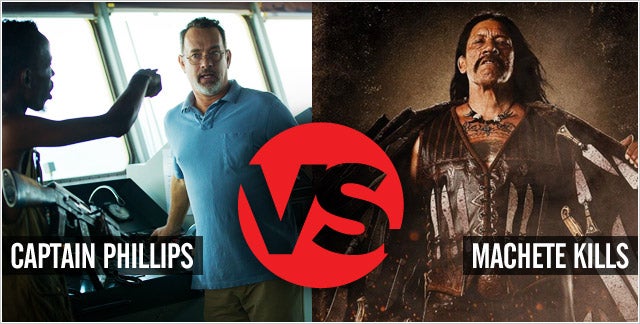 One’s an Oscar-bait tale of modern-day heroism starring Tom Hanks, the other is an over-the-top violent action thriller starring Danny Trejo, Lady Gaga, Charlie Sheen, Mel Gibson, and features Sofia Vergara in a machine-gun bra. They’re targeting profoundly divergent target demos, but the match-up won’t be close. Sony’s Paul Greengrass-directed “Captain Phillips,” about a sea captain battling Somali pirates, is projected to come in with about $20 million and build from there, while Open Road’s Robert Rodriguez splatter-fest should do about half that. Advantage: “Captain Phillips” 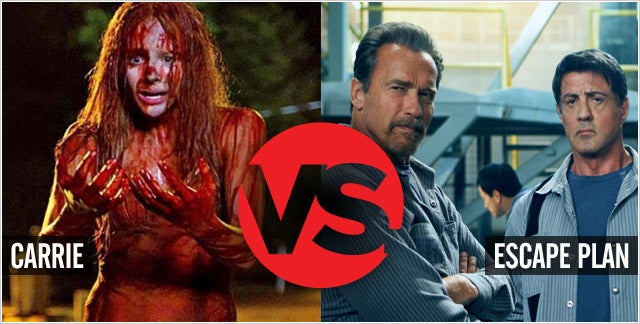 Oct. 18
What’s scarier, a teen girl unleashing telekinetic terror on a small town after a really lousy prom or the fact that Sylvester Stallone and Arnold Schwarzenegger are in their mid-60s and still making action movies? Pre-Halloween is an ideal slot for Sony’s remake of the 1976 horror classic, and a $20 million opening looks likely for the screamer, which stars Chloe Moretz. But Lionsgate’s “Escape Plan” combo of Sly and Arnold busting out of a super slammer should play better than their recent solo outings. “The Fifth Estate,” featuring Benedict Cumberbatch as Wikileaks founder Julian Assange, is in the mix, too, but hasn’t generated much heat to date. Advantage: “Carrie” 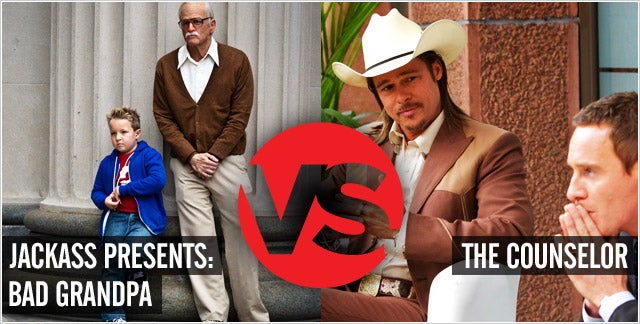 Oct. 25
No one is predicting “Bad Grandpa” will match the $50 million opening of the last “Jackass” movie in 2010, but Paramount’s latest Johnny Knoxville extravaganza is a box-office wild card. More likely the R-rated moron-orama will wind up closer to the first two “Jackass” movies at around $25 million. That’s a best-case landing spot for director Ridley Scott’s “The Counselor,” which features the first original screenplay from Cormac McCarthy (“No Country For Old Men”) and stars Michael Fassbender as a lawyer who gets in over his head after dabbling in drug trafficking. The supporting cast in in the Fox thriller includes Brad Pitt, Javier Bardem and Cameron Diaz, which should pique moviegoers’ curiosity. Advantage, “The Counselor,” by a hair 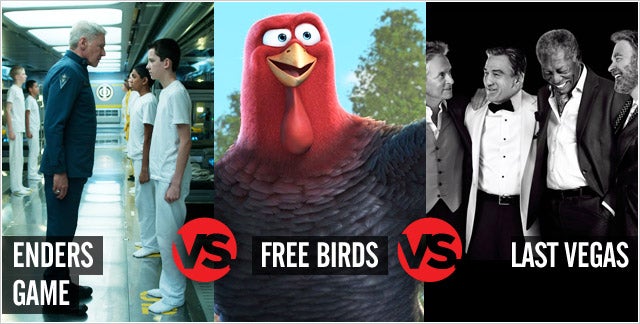 Nov. 1
Based on a beloved-for-decades sci-fi bestseller that should give it a built-in audience, Lionsgate’s “Ender’s Game” ought to be the slam-dunk favorite. It may yet come out on top, but anti-gay marriage comments by the book’s author Orson Scott Card have created a groundswell of negativity and an organized boycott that won’t help. That provides an opening for Relativity’s first 3D animated release ‘Free Birds” (nee “Turkeys”) and CBS Films’ “Last Vegas,” which stars Robert De Niro, Michael Douglas, Morgan Freeman and Kevin Kline as 60-something pals who head to Vegas for a bachelor party. Advantage: “Ender’s Game,” but closer than expected 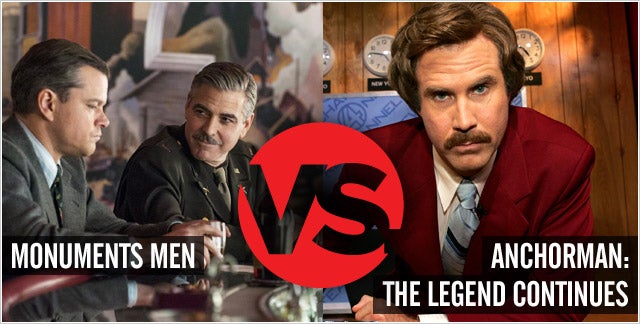 Dec. 20
Some awards pundits who have seen “Monuments Men” say that writer-director George Clooney’s tale of rescuing artworks from the Nazis in World War II, which stars Matt Damon, Cate Blanchett, Bill Murray and John Goodman, plays too much like ‘Oceans Eleven.” That might not help its Oscar chances, but would be fine at the box office since that one made $450 million. The question on “Anchorman: The Legend Continues” is shelf life. Will Farrell and Steve Carell aren’t the draws they were when the original generated a ton of hipster love that turned it into a cult hit back in 2004. The kids movie “Walking With Dinosaurs” will siphon off some parents, but shouldn’t hurt either film too much. Advantage: “Anchorman: The Legend Continues” 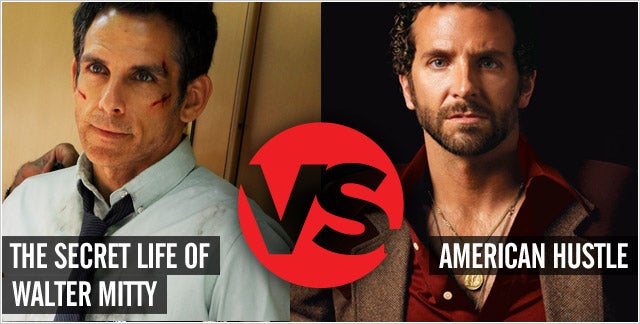 Christmas Day
Ben Stiller’s a pretty good bet for box office success in mainstream comedies (we’ll give him a mulligan on “The Watch”) and “The Secret Life of Walter Mitty” has been building critical buzz as it rolls out on the festival circuit, so it’s one of the few films with a shot at really breaking out. On the surface, Fox’s fresh take on James Thurber’s milquetoast dreamer sounds way more interesting than a 1970s political corruption saga like “American Hustle” – until you consider the director is David O. Russell and that he’s reunited “Silver Linings Playbook” alums Bradley Cooper, Jennifer Lawrence and Robert De Niro and teamed them with Christian Bale, Amy Adams, Jeremy Renner and Louis C.K. That’s star-power, Senator. Advantage: The Secret Life of Walter Mitty